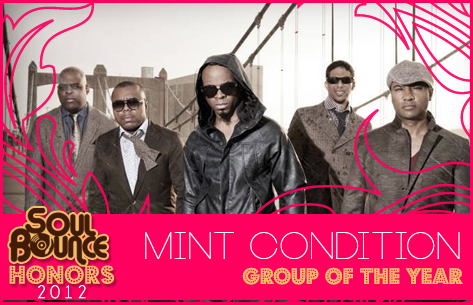 When I think of great R&B groups, I think of the likes of Earth, Wind & Fire, the Isley Brothers, the Gap Band, Maze featuring Frankie Beverly, Kool & The Gang, and L.T.D. I'm sure we could have little fun naming even more. One thing is for certain, no matter what I'm doing, when I hear a song by any of them, I'm immediately moved to a different time and a different place. Ask me to name current R&B groups or bands possessing that type of transformative power, and watch me struggle. There's one group, however, who shone above the rest this year and proved beyond doubt that they are not be thought of as a relic of the past. That band is Mint Condition.
Center

Considering they had just released an album in April 2011, Mint Conditon's Music @ the Speed of Life came as a welcome surprise. There's no doubt that 7... was a solid album, but Music @ the Speed of Life took what was started on 7... and forced listeners to reckon with the fact that this boy band has yet to reach its full potential. This album is worth so much more than a new single to be added to Adult Urban Contemporary playlists. It's funny to think that there are people who still don't see what Jimmy Jam and Terry Lewis saw in 1989 at Minneapolis's First Avenue club, but there are and this is partly an album for them. But, for what was new or unchartered territory prior to this album, the sounds it contained weren't so radically different that longtime fans were left out in the cold. There was something for everyone and for almost all of your moods. Of course, lovers were well taken care of with tracks like "Believe in Us," "What I Gotta Do" and especially "Slo Woman." For those feeling reflective, there's "Blessed" and "Completely." Scorned by love? Mint had a remedy for that too in the kiss-off, "Nothin'." Then, if you just wanted to hear the band do what they do, you'd go for the more upbeat tracks, "Girl of My Life" (which, by the way, features DJ Jazzy Jeff), "Never Hurt Again" and "Be Where You Are."

It's no secret that I revel in the "good ole days" of R&B, but tried and true artists like Mint Condition show that they are not to be counted out. Between the talents bestowed upon Stokley Williams, Jeffrey Allen, Homer O'Dell, Ricky Kinchen and Larry Waddell and the eight albums they've already gifted us with, we have yet to hear all of what this Group of the Year has to offer.