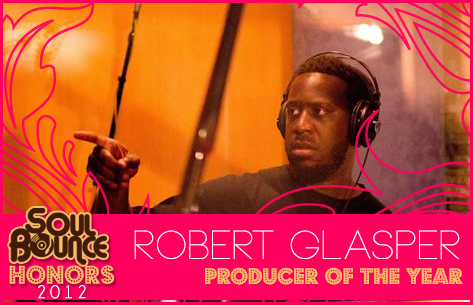 In 2012, jazz pianist and composer Robert Glasper co-produced the bulk of Blue Note labelmate Lionel Loueke's Heritage album, imbuing in it his signature style of rippling piano, and silences holding equal importance as the sounds that precede them. On cuts like "Hope," he created
tranquil soundscapes that allowed Loueke ample room to improvise vocal and guitar
narratives, melding his Beninois origins with Glasper's soulful sensitbilities
to create a  revelatory listening
experience.
Center

If you went into this article with no idea that this even
happened, it's likely because of the sheer magnitude of the work Glasper did on
his own projects, starting with the February release of Black Radio. From its sprawling opener (with piano chords reminiscent of
his work on Loueke's "Tribal Dance") to the spacey bonus track, "A Love Supreme," it had the jam-session feel of Erykah Badu's Worldwide Underground, but more structured and late-night in mood.
Glasper expertly commanded his all-star collective (featuring celebrated drummer
Chris Dave, bassist Derrick Hodge and multi-instrumentalist Casey Benjamin),
becoming a many-tentacled conductor (or straight-up octopus) creating a sound
that was expansive and multi-layered, yet undeniably nourished by a single beating
heart. Sound impressive? Imagine achieving that with not just that talented
crew of musicians, but a roster of vocalists that included Badu, Bilal, Yasiin Bey, Lalah Hathaway,
Ledisi and Meshell Ndegeocello. A guest list that ambitious could either have resulted in a modern classic or an abortion of "We Are The World 25"
proportions.


Black Radio saw a
slew of magical original compositions -- from the rap/vocal/spoken-word
declaration "Always Shine" with Lupe Fiasco and Bilal to the steamy Musq Soulchild and Chrisette Michele duet "Ah Yeah" (on which Glasper deserves
automatic producer points for cajoling vocal subtlety from the previously
averse Michele). And the largely-improvised title track, on which Yasiin Bey
starts out spitting a rapid-fire verse before breaking into a vocal lamentation
worthy of The Book of Job, sees Glasper at his most brilliant. To Bey, he is
alternately a sparring and dancing partner, matching his frenetic pace first
with a foreboding percussion-bass combo, then a ferocious jabbing of the piano,
before going lush mezzo piano for the
song's denouement. It's the moment on Black
Radio in which Glasper most precisely hits all jazz, soul and hip-hop
bullseyes, but it's indicative of a larger victory on the album. For all its
appeal to those prone to "real artistry" and #grownfolksmusic platitudes,
it's thoroughly modern in sound, every bit as of the moment as anything else in
the discographies of its guest vocalists.

But where Glasper really made his mark as a producer was on
the covers making up a sizable portion of the album. From the jazz standard
"Afro Blue" to classics enshrined in the pantheons of soul (Sade's "Cherish The Day") and grunge (Nirvana's "Smells Like Teen Spirit"),
he managed to create works that felt more inspired
by- than interpretive of their source material. Rather than try to fill or copy
the giant shoes of each original, he used its original leather to expertly craft a luxe new jacket. In so doing, he created alternate versions
that never have to compete with the original songs for the listener's ear. Eight
months later, he accomplished this on a meta level by releasing Black Radio Recovered: The Remix EP,
co-producing each track with guests like Questlove, Georgia Anne
Muldrow and Pete Rock. On the
EP, Glasper seemed insistent on testing the gods by attempting to remix his own
remakes. Just as on Black Radio, he
gave a previously-unheard Philly Soul sensibility to "Afro Blue" and a
militaristic jazz take on David Bowie's
folk-rock "Letter to Hermione," on Recovered, both tracks got hip-hop reimaginings much
deeper than the guest raps that accompanied them. The previously molasses-slow "The Consequences of
Jealousy" got a bouncing, G-Funk disco reworking from Muldrow and Glasper,
transforming Ndegeocello from wounded lover to blaxploitation vixen. And Solange
Knowles and The Roots guested on
a heartbreakingly lush, piano-driven reworking of Little Dragon's "Twice," arguably the album's strongest moment.

He closed the EP with a sprawling, nine-minute sonic
tapestry in honor of late Detroit
composer J-Dilla, called "Dillalude
#2." It's fitting, for while he didn't throw his metaphorical cat around town like your Mike WiLLs or Noah Shebibs this year, the astounding accomplishment of releasing
two of the year's best albums puts him head and shoulders above the
competition, crowning him as a worthy successor to Dilla's throne.

The king is dead. Long live the king.