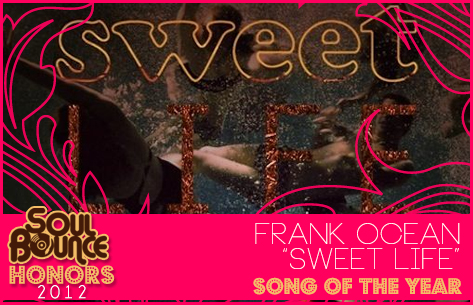 "The best song wasn't the single..." are the first words uttered on "Sweet Life," the third leak leading up to the release of Frank Ocean's magnum opus (so far) channel ORANGE, and truer words had never opened a song. While up until that time "Pyramids" and "Thinkin Bout You" had the distinction of being the first singles released from the project, they were also very much in Frank's wheelhouse with melancholy, slightly cryptic lyrics sung over sparse, moody production. Not that there was anything wrong with either (in fact, "Thinkin Bout You" made many best lists this year and last), but "Sweet Life" was like nothing we'd ever heard from the singer-songwriter. Its lush, Pharrell Williams-assisted production and Frank's inspired vocal instantly perked up many ears around SBHQ and moved even the staunchest of Frankie O. naysayers to have at least a passing interest in what exactly channel ORANGE would be bringing to the table. And, as I called mere moments after hearing it, it's easily the best song of the year.
Center

Perhaps what makes "Sweet Life" so endearing is that it's the rare modern song that looks to the past and, while learning from it, doesn't set out to essentially remake it (no shade to Miguel, this year's other R&B It boy, and his "Sexual Healing" redux "Adorn"). While clearly taking a peek into Stevie Wonder's playbook, Frank and Pharrell managed to incorporate elements of Stevie and even pay homage without losing any sense of Frank's own voice and view. And speaking of his voice, here, unlike most of ORANGE, Frank really flexes it. Though he might not have the range of some of his contemporaries, he shows that he can take it from the near-monotone lows of the verse to the soulful, emotive crooning of the chorus and even the rich falsetto of the bridge. But, ever the consummate songwriter, these tricks aren't used for show, but rather to highlight the mood and emotion necessary in the lyrics.

And let's not forget about the lyrics. Upon first writing about the song, I mentioned that they were deceptively simple. Most people hear the almost joyous tone of the chorus and soaring melody and assume that everything is shiny and happy. However, after a couple of spins, the melancholy and despair beneath that shiny happy veneer bleed through. In Frank's hands "Why see the world when you've got the beach" becomes both a ringing endorsement and dismissive indictment of living life amid all the lavish trappings that one comes to expect in a place like Beverly Hills. And, coupled with companion track "Super Rich Kids," "Sweet Life" allows listeners to see Beverly Hills, and possibly the world, through the eyes of Frank and, to an extent, those of his generation.

Complex, artful and beautiful, "Sweet Life" is just one of those rare songs that almost everyone can agree on. Eventually, this "best song" would be released as one of channel ORANGE's singles, and rightfully so. It not only shows Frank at his best, but also shows the potential of what his best could eventually become.