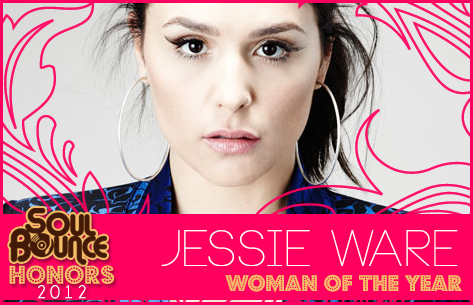 It was around this time last year when I was first introduced to Jessie Ware. There she was, all understated and curiously cool, calm and awkward with the release of "Strangest Feeling," and boy did she make my soul stir. Immediately questions began to rise, and like a good mystery book, I wanted eagerly to skip ahead to get to the unveiling of who exactly was this little lady with such a big voice? Still, it didn't cross my mind at the time that Ware would magnify what she displayed on that mood piece. That the quiet fire and alluring mystique she exuded in just a brief few minutes of music would captivate me well into the new year. So here I am now, coming full circle of what was a banner year for the British chanteuse and still hypnotized I am.
Center

Evoking Sade Adu pillars of chicness, Ware pretty much came out of nowhere. Oh she had been around as she earned her dues by being a back-up vocalist for Paloma Faith and obtained her underground cred as backing catnip for the likes of producers Joker ("The Vision"), Sampha ("Valentine") and the masked mystery that is SBTRKT ("Right Thing To Do"). Yet, her solo venture was like a brisk surprise once it took flight. After "Strangest Feeling" took hold, in the frost of early winter Ware fully made her true grand entrance when "Running" sprinted in as bold and as viciously seductive as ever. From first listen it felt slightly like a reincarnated moment when people heard Donna Summer's "I Feel Love" crackle out of the speakers for the first time over 30-something odd years ago. It was as if something new, something different was on the horizon as it thumped along on icy synths and wailing guitars. With that bewitchment, anticipation had now firmly set in for Ware's debut album. A handful of other singles like "110%," "Wildest Moments," the sugary "Sweet Talk" and an impromptu reading of Bobby Caldwell's classic "What You Won't Do (Do For Love)" would wet the whistle but still not quench the thirst of those waiting for what was to further become of Ware.

We all breathed sighs of relief (especially here at SBHQ) when Devotion was released in the latter blaze of summer. Like many, I was even more pleased when Ware lived up to the promise of all the baiting singles she released beforehand, as usually we have been misled by artists who release all the goodies beforehand and leave us with a coconut candy dud of a full project. With producers Julio Bashmore and David Okumu at her side, Ware crafted an album that is surprisingly free from blemish as every single song is a stunner. Seemingly designed for scorned lovers and the fear and loathing attitudes of the Millennial crowd, Devotion is a provocative mood piece with 11 insulated tracks that are well nurtured by brooding '80's new wave and the soulfully gallant prose and silky rich vocal styles via Annie Lennox and of course Madame Sade Adu. I can't really single out a highlight, as there are days where I go for the brazen "Night Light" and others where submerging in the melancholic "Devotion" and "Taking In Water" is just what I need. Still, the plain and simple truth is that the album is screaming to be a modernized classic, fit for ripening fine wine style as the years go on -- that is if the fickle music industry gets their pompous feathered heads out of the sand to join the cool kids lunch table for a change.

Which leads me to say that maybe it is a blessing they keep their heads under sand, considering how refreshing it is that the grubby paws of the music industry haven't gotten to Ware (well, yet anyways). How pretty untainted she is and how she has achieved her rapid success the old-fashioned way. You know the way grandma used to bake. No sex tape, desperate "look at me!" striptease or the usage of daddy's bank account was in sight as Ware didn't use the expectant gimmick to instant 21st century stardom. I truly breathed sighs of relief whenever I saw Ware gaining traction throughout the year not by dressing like a couture Oopma Loompa or by clamoring with sexual steeze, but by unbleached talent. In today's over-sexualized and over-baked 15 minute society, it's just enjoyable to have someone who just embodies the "T" word effortlessly without all the unnecessary distractions.

Though things appear favorable, the after effects of Devotion are inaudibly vague at present. It's undeniable that the praise bestowed upon it is warranted as well as the applause for Ware's artistic merit, but where do we go from here? Was this just a one-time stunt? Will she be overshadowed by future acts to come? Or will she continue to rise to the occasion? Like the wise ones say, only time will tell where Jessie Ware stands next year, the year after and beyond. She does have strict competition as other moody grandiose acts like Delilah, Emeli Sandé, Lianne La Havas and grand dame Adele are hot on her heels. Still maybe I should stop flipping ahead chapters and let the enigmatic nature of Ware unveil itself in gradual time, and just enjoy watching her seize her moment and root for her to keep on rising, because she has my utmost undivided attention now.