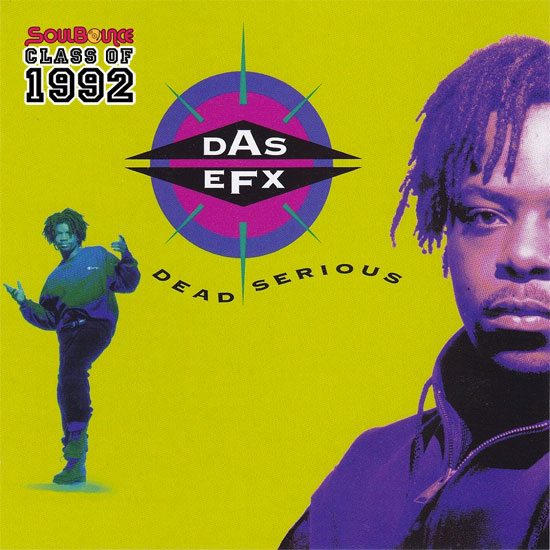 If you are anything like me, then that was likely your reaction the first time you heard Das EFX back in 1992. Long before Snoop Dogg decided to cultivate his own form of speech by tacking on "izzle" to everything, this East Coast duo turned the music world upside down with the innovative style and wordplay featured on their game-changing debut album, Dead Serious.

The story of Das EFX began like so many other groups before and after them -- in college. Although one was from Brooklyn and the other from New Jersey, Virginia State University would bring Andre "Krazy Drayz" Weston and William "Skoob" Hines together. However, it would be their love of hip hop that would send them on a meteoric rise to the top. After catching the attention of EPMD members Erick Sermon and Parish Smith, the two inked a deal with East West Records under the guidance of Sermon and Smith.

It was while they were still students that the two recorded what would become their breakout hit, "They Want EFX." The song leaked to the public to the public early, demand prompting the label to move the release date of Dead Serious up. And just like that, Drayz and Skoob were introduced to the rest of the world with a bang. Although it was likely the James Brown sample that caught your attention, it was unequivocally Drayz's opening verse that reeled folks in hook, line and sinker. "Bum stiggidy bum stiggidy bum!" he boomed, making it clear that these were not going to be your typical lyrics. I mean, who else was just making up words and throwing random references to everything from children's nursery rhymes to cereal to Chubby Checker? All of the factors were in place to make Das EFX stand out from the growing rap industry at the time. Their raw, dark production provided just enough edge to appeal to even the hardest of listeners, while their inventive words and random, yet nostalgic imagery made it easy for anybody to sing along.

The one-two punch of the driving beat combined with their unique lexicon proved to be a risk worth taking. Overnight, "They Want EFX" was in regular rotation everywhere. Though we may not have known what the heck they were talking about, it didn't stop us from memorizing the words and nodding our heads to the music. They were distinctively New York, yet able to appeal to music fans from all corners of the world. The song landed them on several Billboard charts and reached the top spot on both the Hot Dance Music/Maxi-Singles Sales and Hot Rap Singles charts.

Just as they had cultivated a unique sound, Drayz and Skoob also crafted a distinct image. With their sound coming "straight from the sewer," their videos brought that description to life, usually showing the guys wandering dark, sinister-looking tunnels. Dressed in mostly all black from head-to-toe, Das and crew put on their best menacing looks, with Skoob and Drayz punctuating their lyrics with animated gestures. As a duo, their chemistry was undeniable. Their individual delivery and flows fit together perfectly as they tag-teamed back and forth as they traded verses.

Drayz and Skoob kept the momentum going with the release of their second single, "Mic Checka." Equally as grimy as their debut, the song further cemented their place as one of the hip-hop acts to watch. Though "Mic Checka" didn't perform as well on the charts as its predecessor, it still made quite the impact on rap music fans far and wide, landing them in the #1 spot on the Hot Rap Singles chart once again. An overall solid album, main highlights included "Jussumen," "If Only," "Straight Out the Sewer" and "Klap Ya Handz."

While only three songs would be officially released from the album, it was enough to propel Dead Serious sales, helping it reach platinum status by 1993. Critically-acclaimed, the album earned 4 mics from The Source and played a role in changing the sound of hip hop at the time. Soon enough, their influences could be heard in the flow and deliveries of other artists, prompting the guys to make some changes the second time around. So when they still could have been riding high on the strength of their debut, they were already back in the studio by the end of 1992, working on ways to take their style to the next level on their sophomore album. Moving away from the -iggidy style that had come to define Das EFX's sound, their second album, Straight Up Sewaside found the duo showcasing a more straightforward rhyming style. Though still relatively successful, it never reached the heights that Dead Serious had.

And while contentious breakups usually play a role in the end of so many successful groups, it wouldn't be a split between Drayz and Skoob that would slow their roll. Rather, it would be the breakup of EPMD that would run Das EFX's career off course. Caught in the middle of the messy EPMD split, it would be another three years before the guys would release new material again. By then, many had lost interest in the rugged sound that Das had made popular, instead moving towards the slicker sounds of P. Diddy and his shiny suited Bad Boy cohorts that had begun dominating charts and airwaves everywhere.

Twenty years after first debuting, the duo known as Das EFX remains a unit, still performing and recording music for a small, yet loyal fan base. And while some of those fans may show up to hear music from Das' other releases, it's the pull of Dead Serious that keeps them coming back for more. While many releases from that time can often sound dated when dusted off and played today, Dead Serious is one of the few that has stood the test of time, sounding just as good and innovative now as it did back then.