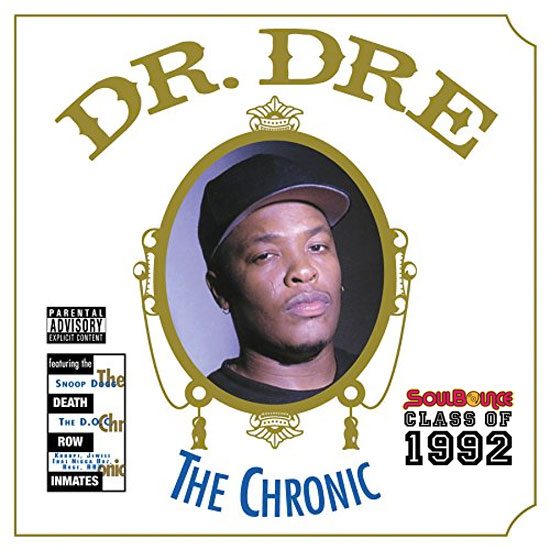 It pains me to say this, but Tipper Gore was right. Though I'm still opposed to her 1980's obsession with making music a lot less fun for the rest of us, I have a first-hand understanding of her motivations. No, I didn't catch my daughter jamming out to the horrorgasmic climax of Prince's "Darling Nikki." But I remember the exact circumstances that led me to the sailor-mouthed individual I am today. On the last day of the fall term, my sister (then in middle school) came home with a brand-spanking new tape she would blast all day for the rest of the year (well, while our parents were out): a new album called The Chronic by Dr. Dre.

Now, I was by no means a sheltered kid -- I grew up with Redd Foxx, Eddie Murphy and Millie Jackson spewing all manners of filthy wit around our house. But not until The Chronic did I feel an aching need to bust out as many f*ckin' profanities as a muthaf*cka could fit into a single f*ckin' sentence. But I'm pretty sure this album was significant in ways other than corrupting a perfectly cherubic fourth-grader in Lagos, Nigeria.

Let's see if there's anything else worth discussing.

A year after the pop charts got a grungy makeover with Nirvana's Nevermind, rap was still dominated by the lighthearted sounds of MC Hammer, Heavy D & The Boyz and DJ Jazzy Jeff & The Fresh Prince. Acts like Arrested Development and A Tribe Called Quest tried to deliver weightier messages to audiences while keeping the competition on the commercially viable dance floor largely ignored by the likes of Public Enemy and X-Clan. It was into this ring that Andre "Dr. Dre" Young, a rapper/producer/DJ who had previously found significant success as part of the controversial rap group N.W.A., threw his soon-to-be-trademark White Sox hat. But rather than try to win the prevailing party-vs-"conscious" battle, he chose to build on the nascent "gangsta rap" subgenre he had helped pioneer with N.W.A.

Though he first emerged as a solo act on the soundtrack cut "Deep Cover," The Chronic would officially put him on the map -- ending any lingering confusion casual observers had between him and radio/television personality Doctor Dré. And he couldn't have asked for a more powerful propeller than lead single "Nuthin' But A G Thang." Lyrically, it was little more than Dre and a young unknown named Snoop Doggy Dogg running down their rapping resumes. But its production, with a pace akin to a drowsy pimp walk and built on a sample from Leon Haywood's "I Want'a Do Something Freaky to You," was starkly different from anything else on the radio at the time. And with its Dre-directed video burning up the traditionally urban music-averse MTV airwaves (surprising, despite its infinitely watchable lazy-Saturday tale that felt like House Party as directed by John Singleton) "G Thang" soon shot to No. 2 on the Billboard Hot 100.

But after sneaking into America's (and evidently, Nigeria's) living rooms with the party-friendly "G Thang," Dre soon unleashed the full Chronic album, decidedly more sinister in theme and tone, on the world. Though the album defiantly mocks the efforts of the conscious rap movement ("no medallions, dreadlocks, or black fists / it's just that gangsta glare / with gangsta raps" on "Let Me Ride," and the Willie Hutch-mocking intro on "Rat-Tat-Tat-Tat"), it sees Dre continuing in N.W.A's "CNN of the streets" tradition, reporting on both the causes and aftermath of that year's historic LA riots, while sounding like just the tape you'd pop in before going to bust skulls and storefronts during those six days of mayhem.

It's such contrasts that help make this album such a masterpiece. "Rat-Tat-Tat-Tat" glories in violent confrontation and "F*ck Wit Dre Day (And
Everybody's Celebratin')" explicitly invites it from contemporaries Eazy-E, Tim Dog and Luke Campbell, while "Lil' Ghetto Boy" describes the less glamorous consequences of this lifestyle the rest of the album so gleefully glamorizes. It pioneered or popularized what would become many of the more problematic elements of mainstream hip-hop: an over-reliance on recorded skits (the sex-act skit being destined to become a particularly tedious trend), a conscience-free glamorization of violence, and a heightened, casual but consistent misogyny (particularly having the "b*tch/ho" epithets coming from female voices like The Lady of Rage and Jewell). It's also a somewhat difficult listen with the benefit of hindsight, considering the long-term sequence of events starting here, that would eventually take the lives of two of the genre's brightest stars.

Perhaps the greatest triumph of this album is that, despite all these problems, it's still a horrendously enjoyable listen 20 years later. One reason often overlooked due to its riotously aggressive tone is that The Chronic is a profoundly musical album. The bassline on "Let Me Ride" is a thing of pure wonder, and "Nuthin' But A G Thang" somehow manages to be not just harder, but funkier than Haywood's original. And ending "Lil' Ghetto Boy" with a perfectly lush, minute-long flute solo was a stroke of unexpected genius. While hip hop has always relied on samples of older compositions, this album shows a disciplined focus on works of '70s funk and soul as source material, resulting in a sort of post-Rodney King blaxploitation concept album. And where other producers saw sampling as a means to an end (the end being a hot, of-the-moment record), Dre's sampling hand on The Chronic feels like a love letter to the works of innovators who were redefining music at the time rap was being born. Nothing better illustrates this than the decision to close the "Dre Day" video, a rolling-through-the-hood narrative similar to that of "Nuthin' But A G Thang," with concert footage from Parliament Funkadelic, an act sampled multiple times on the album.

Sadly, a lot has changed in the 20 years since Dre assembled a brilliant cast of unknowns to create this album. Snoop has gone on to become a many-splendored caricature. Nate Dogg passed away in 2011 after suffering multiple strokes. The Dogg Pound is no more, while Jewell and The Lady of Rage never really got to be. And Dre himself is now better known to kids as that dude who sells headphones and probably does steroids. But I've changed, too. Twenty years later -- almost a decade of which I've spent in the ad industry -- and I fear the prospect of being around children for more than an hour, wondering when I'll carelessly let some unsavory language slip (really, it's a blessing I don't constantly sound like Dennis Leary after doing Scarface-esque mountains of coke). I sometimes think about the choir boy I could have been, had I never been introduced to this album, and I wonder if it was worth it.Then I think about a life without certain iconic, utterly satisfying lines, from "f*ck so pretty, you and me" to "Just another muthaf*ckin' day for Dre," and I have my answer.