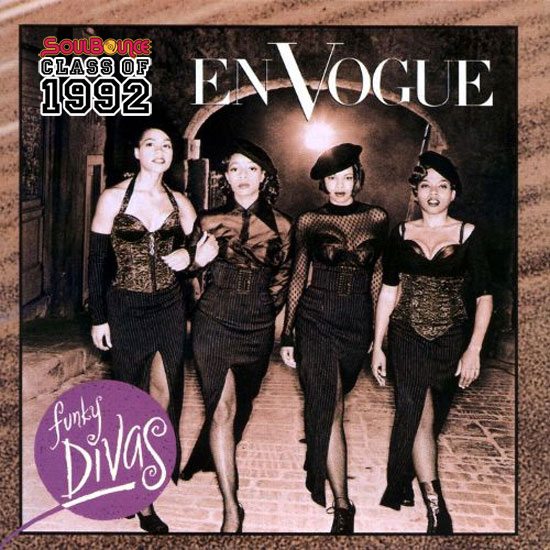 If you want my opinion (and even if you don't, I'm going to give it to you anyway), the best girl group to ever do it was Maxine Jones, Terry Ellis, Cindy Herron and Dawn Robinson, otherwise known as the electrifying quartet En Vogue. In the early '90s, these ladies were the total package. Their vocals rivaled -- and, in more than a few cases, surpassed -- those of their contemporaries and they managed to find just the right balance of talent, sass, class, style and sophistication to differentiate them from the masses. Their 1990 debut Born to Sing, home to hit after hit after hit after hit, showed that the foursome was a force to be reckoned with. When 1992's Funky Divas came around, heralded by their blockbuster single and video "My Lovin' (You're Never Gonna Get It)," it proved that the ladies weren't just a force, they were a phenomenon all their own.

But, while Born to Sing had definitely earned them the title of "divas," what exactly made them "funky" this go 'round? "My Lovin'," which found them once again borrowing a piece from James Brown's "The Payback" and mingling it with a sassy lead vocal and the ladies' flawless three-part harmonies, was just a foretaste of what was in store. Denzil Foster and Thomas McElroy, the creators and producers of the group, expanded on the R&B foundation Born to Sing had laid, allowing the ladies to explore pop ("Yesterday,") New Jack Swing ("Hip Hop Lover"), hip hop ("It Ain't Over 'Til the Fat Lady Sings"), vintage soul ("Giving Him Something He Can Feel" and "Hooked on Your Love, both of which were lifted from Curtis Mayfield and Aretha Franklin's soundtrack for 1976 film Sparkle), dance ("What Is Love"), rock ("Free Your Mind") and, of course, funk textures for the ladies to wrap their voices around. It was a shrewd decision that resulted in a musical rarity: an album with no filler.

Of course, an album with no filler yields major successes singles-wise, and Funky Divas was no exception. The album yielded five Top 40 singles, with three peaking in the Top 10. Aside from "My Lovin," which rocketed to No. 2 on the charts, their pitch-perfect rendition of "Giving Him Something He Can Feel" was a big hit, peaking at No. 6, garnering massive radio spins and nearly eclipsing the song's association with Sparkle altogether. Then there was the out-of-left-field "Free You Mind," a rare departure from the group's usual meditations on love, that rocked its way into our minds and ears. Peaking at No. 8 on the Hot 100, it would garner many award nominations, including a surprising 1993 GRAMMY nod for Best Rock Vocal, Duo or Group. Rounding out the singles crop, the smoothed-out groove "Give It Up, Turn It Loose" and the jilted hearts anthem "Love Don't Love You" would place the lowest on the charts (Nos. 15 and 36, respectively). It wasn't for lack of quality, though. "Give It Up" would garner them yet another GRAMMY nomination in 1994 and "Love Don't Love You" was a stone cold jam that just happened to come at the tail end of an impressive run.

But to talk about this album and solely talk about the music does it a disservice. Funky Divas did more than just propel En Vogue to the top of the charts. It made the group a household name. It was during this era that En Vogue mastered the art of the image.Their videos and look from this time would become iconic. Sure, they had always been put together well, but Funky Divas found them serving the complete package at every turn. It started with the videos, from the saucy bop in the clip for "My Lovin'" to the sultry vamping of "Giving Him Something He Can Feel" and the kick-ass futuristic posturing of "Free Your Mind, and translated to the myriad live performances and awards show appearances that would come. In fact, the videos for "My Lovin'" and "Free Your Mind" would win them four MTV Video Music Awards.

As well, the album would also give the quartet more exposure than they could've bargained for. The ladies booked screen time on hit shows like A Different World and In Living Color and even contributed the theme song to ABC's Hanging with Mr. Cooper. But the train didn't stop there. Endorsement deals were plentiful and they were even tapped to open for Luther Vandross (though that resulted in a few backstage clashes of personality that would lead Luther to vow never to work with the ladies again). And, speaking of trains, due to the massive success of Funky Divas, they were also given the Soul Train Entertainer of the Year award (and this was back when a Soul Train Award actually meant something).

Of course, we can't discuss En Vogue or Funky Divas without discussing the fallout that occurred afterward. Depending on the day and who's telling the story, the group's infighting and label woes were caused by a myriad of things: being at odds with Foster & McElroy, diva attitudes, contract renegotiations, money, Terry's under-performing solo album, Industry Rule #4080 (which we should just rename "The Sylvia Rhone Clause") and so on and so forth. Whatever happened, the end result was Dawn Robinson leaving the group in 1997, a move that would create the instability that has haunted the group to this day and caused its lineup to be mostly a revolving door ever since. Most recently, after a reunion/reconciliation of the original four for the group's 20th anniversary, Dawn and Maxine left once again to form their own group, "Heirs" to the Throne, while also being involved in litigation for the rights to the En Vogue name. While it doesn't look like this split will generate a happy ending, one can only hope that the ladies will resolve their issues and recapture the lightning in a bottle that brought about Funky Divas.