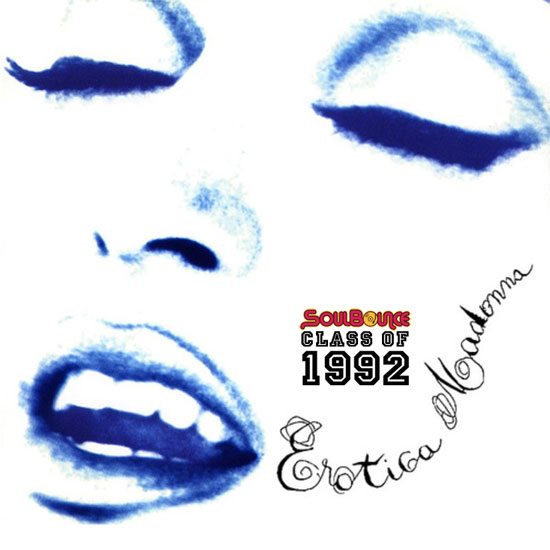 Cover the children's eyes and ears! Get thee to the church and get down on your knees and pray away the sin that has befallen upon us! Madonna has corrupted us again with an album that is abundant with nothing but smut and debauchery! Okay, all exaggerations aside, on the exterior and to her dissenters, the Erotica era was Madonna's on-going attempt to shock and awe once again with her sexual yammering. Yet, that was just a misconception. Putting tongue to cheek, Erotica managed to fool listeners back in 1992 as clever Madonna crafted an album that really wasn't all that erotic. Sure there are spicy sexual word plays and a blatant title track that outlines just what it states, but Erotica drips with despondency, cunning wit and some of the earliest shimmers of the deep house genre, making it more than just an album where Madonna talks about hers, yours and my love below.

Being a Madonna fan for as long as I've been and proclaiming that her trio of masterpieces are her 1983 debut album, 1989's Like A Prayer and 1994's Bedtime Stories, I have to wedge in Erotica as the fourth masterwork of her career, as it's the understated set of her 30+ year career, and well, because I also like rooting for the underdog. It's an album, to me, that finally gave clearance that Madonna wasn't the "Minnie Mouse of Pop," that she had some depth and that she was in-tune not just to the groove, but the pulse of human nature.

With Erotica, Madonna made an album that pulsates with a quiet boldness as it looked at all various corners of sexuality, its successes and failures. It celebrates the act of sexual freedoms but also rumbles with a sense of warning to the pain these freedoms can cause. This album isn't just shock to be shock, or some poorly slapped together Twilight fan fiction that is morphed into a best-selling series about S&M (looking at you Fifty Shades of Grey), this is an album that meant what it delivered on its sleeve. And if you didn't already catch the foreshadowing from the haunting "Justify My Love" from 1990, then Erotica was your morning wake-up call that Madonna wasn't done exploring what private desires we all possess.

Taking on an alter-ego of a frisky gold-toothed woman named Dita (the namesake deriving from German actress Dita Parlo), Madonna is our guide into a dungeon of sexual fate and abandon, and it's scary but fun, as Grace Jones would say. Producers Shep Pettibone and Andre Bettis create an atmosphere that is deep and provocative, icy and isolated. Mixing in an undertone of jazz, New Jack Swing, trip-hop and a sensibility of house into the pop batter, Erotica is musically the "blackest" Madonna has sounded since her 1983 debut, back when people believed when they heard "Everybody" and "Holiday" that she was sepia-toned. Erotica made appearances on the R&B charts, as the title-track just bubbled in the top 20, but still, its overall feel and approach had it right at home as an influence for future R&B artists to come. Still, Madonna always did R&B well, so Erotica glides into familiar territory.

She cracks the whip and beckons us in with the proclamation of the title track, which expertly weaves Kool & the Gang's "Jungle Boogie" in the background. Its dominatrix inspired video (which was banned from MTV) adds to the plot, still the visual isn't needed to express such possession. She notes that we "don't know what pain is" but that she can bring us "so much pleasure0", and snidely she expunges this. She's surprisingly being completely apathetic and down-right cold. Cynicism also crops up on "Waiting" as it slithers in on a lounging trip-hop floor, to where Madonna snarls at her tardy lover. Also the cutesy sugar pop of "Bye Bye Baby" plays like a mocking and sarcastic Betty Boop number.

A jab towards promiscuity is taken center-stage on the skittish house pulse of "Thief of Hearts." With it I'm somehow leaning towards the concept of this is Madonna putting the mirror in front of her and shaming herself. A lot of that happens within Erotica, where Madonna sometimes exposes herself as the enemy. Another instance is in the hit-single-that-should-have-been "Bad Girl." The suspenseful piano-driven torch ballad grimly outlines the unhappiness of a love-starved woman who is perpetually drunk by six and kisses stranger's lips. The track carries the shame from "Where Life Begins" before it, and the latter is a sexy R&B affair that details the carnal pleasures of life, slightly marred by the goofy Kentucky Fried Chicken motto ('It's finger-lickin' good!'), but remains sensual and ominous to its core.

Madonna also musters the courage to give remembrance to those who were lost to AIDS on the grave reading of "In This Life," and its shivering delivery adds to the air of despair and heartbreak that Erotica carries.

Still, there are warm spots to contrast these bleaker moments, even if their subject matters touch on the complex. The chugging disco affair of "Deeper and Deeper" touches on a young man coming to grips with his homosexuality and it's a passionate number with a flamenco guitar and Madonna even sampling herself with the refrain of her monster 1990 hit "Vogue" latched in. Her rendering of Peggy Lee's "Fever" is also fun, harmless even, and took on a playful club spin of the original.

"Why It's So Hard" takes the album into a turn-around zone as it bounces along where Madonna reinforces harmony. It's the illuminated hope in Erotica's almost dystopian look at romance and sexuality, to where she brightly urges us to "love your sister, love your brother." Also on this trek is the grunge jazz exercise of "Secret Garden," which hints at the act of rebirth as it closes things out.

By far my favorite moment on Erotica is the brisk surge of "Rain," and it is absolutely one of her finest hours as it displays a sort of tenderness and buoyancy that she tends to excel at. Madonna was never thought of as a balladeer as she hadn't the powerhouse voice to carry that title, but "Rain" proved that she was comfortable in being reflective, and to me, shows that sometimes you don't need all the theatrics, that you can still express by treading lightly.

We can now see the future effects of Erotica, the pop starlets who pulse out now about being tapped into their sex kittenish ways. All this can be yawn-inducing as we've been there, and done better than that when it comes to sexual awakenings and bold feminist punches (see Janet Jackson's coming out party come next class reunion). Now Erotica is a tame, refined beast in today's over-sexualized world, but still, I'm hard-pressed to believe that any pop tart worth her salt today would even dare try to emulate this album, thematically and stylistically.

Madonna is wonderful when it comes to damage control as two years later she returned with the lush soulful affair of Bedtime Stories, then to follow that her genuine acting turn in the movie-musical Evita and her entry into motherhood washed a spearmint refreshment of the Erotica era out of everyone's mouths, getting her back in everyone's good graces. Still, Erotica and all of its musical risks and squirmy surprises is the kindle that truly kicked off the '90's era of Madonna -- arguably her finest decade -- and it's an album that exposes and celebrates what was the all-true Madonna.