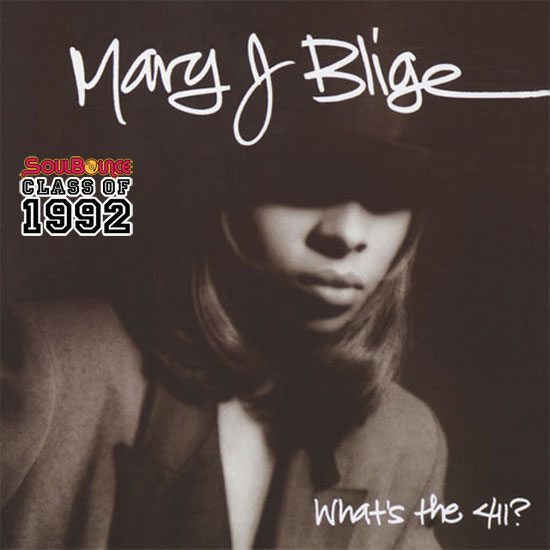 She may not have been the first to release music that fused elements of hip hop with soulful R&B, but once she was marketed as the "Queen of Hip Hop Soul" coinciding with the release of her debut album What's the 411?, Mary J. Blige wore that crown like a fitted. She was the living, breathing embodiment of hip hop soul -- street smart, sexy, sassy and strong in song and style. Blige was the kind of around the way the girl LL Cool J rapped about and who so many of us identified with, whether we were girls from the hood or suburban chicks just playing the role. But as for 21-year-old Mary Jane Blige? She was as real as they came, which sealed the deal for What's the 411?'s immediate appeal and eventual success.

What's the 411? was released in July 1992, but Mary J. Blige had been officially introduced to the listening public as the female voice singing for her life on Father MC's hit "I'll Do 4 U" in 1990. That was a year after she signed to Uptown Records, home of Father, Heavy D & The Boyz, Guy, Jodeci and Al B. Sure!. Label boss Andre Harrell inked a deal with Mary who held the distinction of being the first female vocalist and youngest artist signed to Uptown. Assigned to develop her as an artist and to co-executive produce her debut project was a then little-known intern-turned-A&R executive by the name of Sean "Puffy" Combs.

Puffy took Bronx-born, Yonkers-bred Blige and played up her urban swagger that was more in line with fellow female R&B acts to make their album debuts in '92, TLC and SWV, than chart-topping R&B/pop divas of the day such as Whitney Houston or Mariah Carey. Mary's aesthetic mirrored the street style seen everywhere from block parties to college fashion shows. She was all baseball caps, baggy athletic jerseys, combat boots and big earrings with a little leather, lycra and spandex thrown in when it was time to get sexy, and her hair and makeup was always salon fresh. With her look on lock, the music had to bring the substance to back up her style. And boy did it.

Mary's first single from What's the 411? was released a full year before the album dropped. The buoyant and catchy sing-along "You Remind Me" came out in June 1991 and marked MJB's solo debut. Her gospel-tinged voice made itself comfortable on the Patrice Rushen-sampling hip hop-infused track. The song found its first home on the soundtrack to the romantic comedy Strictly Business, released in the fall of that year before leading the charge of 411 the following summer and hitting No. 1 on the Billboard Hot R&B Singles chart.

"You Remind Me" opened ears and cracked doors for Blige who kicked them in with her heavy duty boots upon What's the 411?'s release. The album's first and oddest track, "Leave A Message," consisted solely of voice mail messages from Mary's famous friends and supporters, kicked off by none other than Puffy himself, set to a sample of Schoolly D's "P.S.K. What Does it Mean?" After hearing "Leave A Message" once or twice, this was a track that could be easily skipped to get to the meat of the album.

The next two tracks, "Reminisce" and "Real Love," were the third and second singles respectively. The single girl's lamentation that was "Real Love" joined "You Remind Me" in packing dance floors (with many trying to recreate the choreographed moves from the video) but upped the ante with the flip of the familiar beat from Audio Two's "Top Billin'." "Real Love" became Mary's second No. 1 on the R&B chart and her first top 10 song on the Billboard Hot 100. "Reminisce" didn't fare as well on the charts, but Mary registered one of her finest vocal performances on What's the 411? here and the surprisingly uptempo groove would hint at a lovelorn and melancholy Mary to return in full force on My Life in 1994.

After the Busta Rhymes "Intro Talk" interlude, the fourth and fifth singles were up next -- "Sweet Thing" and "Love No Limit." "Sweet Thing" was a remake of Rufus featuring Chaka Khan's 1975 hit, and Mary's version was an adequate rendition. The limitations of her voice were evident when she couldn't mimic Chaka's wails, but MJB got an A for effort and made the song her own. "Love No Limit" on the other hand found Mary in a vocal comfort zone on the hip hop meets jazzy soul mid-tempo. The album's singles would end here but there was no end to the good music on What's the 411? until the last beat of the last song.

"I Don't Want To Do Anything" featuring then boyfriend K-Ci Hailey of Jodeci fame should have been a single given all of the quiet storm airplay that the smoldering duet received at the time. The track is the strongest album cut of 411, but the remaining songs all had their merits and showcased Mary on varying tempos and addressing topics of interest to young women. There was the "Let's Wait Awhile"-ish message of "Slow Down," the peppy kiss-off of "My Love" and the pleading to understand of "Changes I've Been Going Through." The album's closer is the in-your-face title track and another duet, this time with Blige teaming up with Grand Puba and rapping. Her rap alter ego Brook-Lynn may not have made a name for herself until years later, but she was birthed on "What's the 411?" and hun was pretty nice with her rhymes.

What's the 411? not only ushered Mary J. Blige into our worlds, but it served to define a sub-genre of music that would take over where New Jack Swing left off and continues to thrive to this day. The Queen of Hip Hop Soul and her team of writers, producers and Puffy set the curve with What's the 411? The album hit No. 1 on the Billboard Top R&B/Hip-Hop Albums chart, No. 6 on the Billboard 200, would spawn a remix album and has sold over three million copies to date. In the past 20 years, MJB has released 12 albums, amassed millions more in album sales, received numerous awards and accolades, toured extensively, expanded her brand into acting and other business ventures, remained a trendsetter, gotten her life together after years of alcohol and drug abuse and found love in a hopeless place. Mary J. Blige's career has ebbed and flowed, but this survivor continues to ride a well-deserved wave of success that all started here.