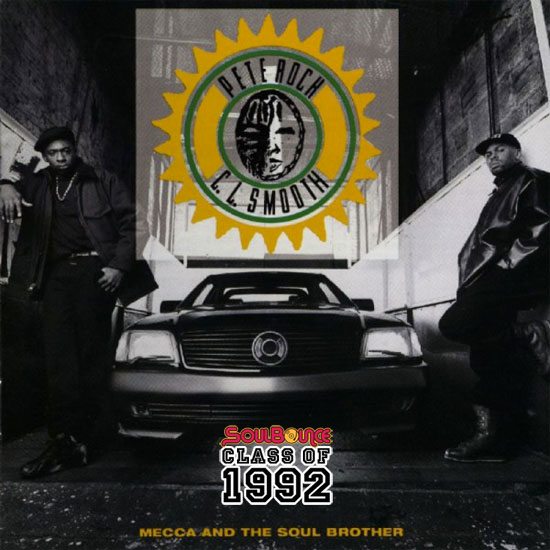 Although their true first release may have been an EP in 1991, 1992 signaled the year that Pete Rock & C.L. Smooth made their proper debut to the masses with the album Mecca and the Soul Brother. And what an album it turned out to be. It wasn't a runaway smash when compared to other hip-hop releases that year such as Dr. Dre's The Chronic or Arrested Development's 3 Years, 5 Months & 2 Days in the Life Of... , but what it lacked in commercial sales it made up for in critical acclaim in the media and positive word of mouth from the streets to college campuses. The dynamic duo blended hip hop with soul and jazz samples, lyrics that were both conscious and raw and references to their Islamic faith to create what is now considered a hip-hop classic by many. This album also has the distinction of counting amongst its tracks arguably one of the greatest hip-hop songs of all time -- "They Reminisce Over You (T.R.O.Y.)."

Money Earnin' Mount Vernon is where it all started for Peter Phillips and Corey Penn who met in high school and bonded over their common love of hip hop. Pete Rock already had a connection to the game -- his cousin was Heavy D -- and he immersed himself in his father's record crates and honed his DJ skills. Rock would add producing and rapping to his skill set and together with C.L. and his distinctive lyrical flow they'd make it official as Pete Rock & C.L. Smooth. They tested the waters with '91's All Souled Out, which would hint at the greatness to come the following year.

Released in June 1992, Mecca and the Soul Brother was one of the albums to have in heavy rotation that summer. Living in Washington, DC, you couldn't walk down the street without hearing the centerpiece of the album and its biggest single, "They Reminisce Over You (T.R.O.Y.)," blasting from a car or in someone's headphones. And when the DJ would drop it in at the club? Forget about it. It was a wrap. All starch was danced out of clothes and curly hairstyles became straight -- trust me, I speak from experience. This song -- a dedication to Trouble T Roy, Heavy D's backup dancer and one of The Boyz, who died accidentally in 1990 -- was an artful mash-up of samples produced to perfection by Pete Rock. The distinctive horn loop that would become the song's signature sound was taken from the Tom Scott and The California Dreamers' remake of "Today," originally performed by Jefferson Airplane. Aside from the personal life story that C.L. Smooth relayed via "T.R.O.Y.," this is what made this song so special -- the care with which Pete Rock would choose his sample material and slice and dice it like a musical chef.

That mastery is what made heads take note of Pete Rock's DJ and production skills that were on blast from start to finish of Mecca and the Soul Brother. But not to be overlooked were his rhymes, which were pretty nice and heard on jams such as "For Pete's Sake," the posse cut "The Basement" (also featuring cousin Hev and his younger brother Grap Luva on MC duties) and "Soul Brother #1," also his nickname and a song that sounded like a lost Public Enemy track thanks to a familiar sample and his cutting and scratching that would make The Bomb Squad proud.

While Pete Rock did his thing and did it well on the production tip, the other star of the show was without a doubt C.L. Smooth. To a lesser MC, Rock's productions might have overwhelmed, but C.L.'s butter-smooth voice found the perfect home there. His flow remained laid-back and chill throughout, even atop frenzied or funkdafied beats and loops, such as on "Ghettos of the Mind," "Wig Out," "Anger In the Nation," "It's Like That," "Can't Front On Me" and "If It Ain't Rough It Ain't Right." He shined on those albums cuts, but his star power was in full effect on the album's other singles, the let-your-backbone-slip-and-slide ready "Straighten It Out" and the hip-hop quiet storm of "Lots of Lovin." On "Lots of Lovin" C.L. lived up to his last name with sensual and tasteful bars that expressed his feelings like a man smitten. Later on the album he'd get a little more gully on the topic of sex on "Skinz" with Grand Puba on the assist and Pete Rock adding a few bars for good measure before the album came to an end.

Mecca and the Soul Brother's warm reception by hip-hop heads didn't translate on the charts, and no one could foresee that the pair would only release one more album, 1994's The Main Ingredient, before creative differences would send Pete Rock & C.L. Smooth in separate directions. Following their split, both artists would release solo albums but none of their singular releases have been a sensation on the level of Mecca and the Soul Brother. The Pete Rock & C.L. Smooth story isn't over yet, though, and it may just have a happy ending. In 2010, they squashed their beef and reunited with talks of a new album in the works. With the chemistry that these two once had and this classic album as the foundation, hip-hop lovers can't wait to hear what Pete Rock & C.L. Smooth are able to build together again.