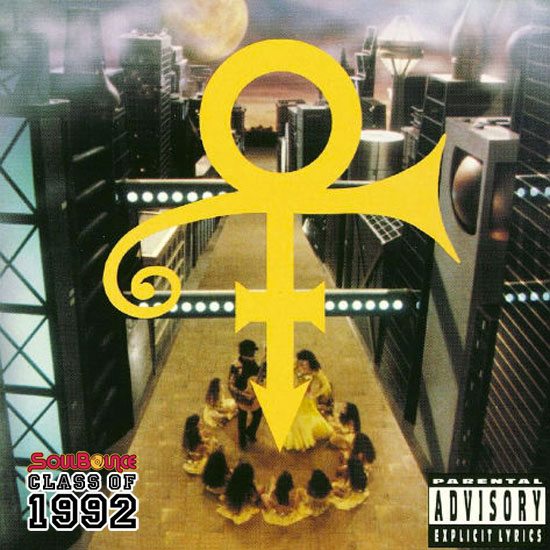 Prince has cleaned up his act from his scandalous days and ways of old and has chosen to no longer perform some of his more salacious material due to religious reasons, which is a pity because that means that we'll likely never hear him perform "Sexy M.F." live ever again. Not that I'm in any rush to hear Prince rap, but the first single from his 1992 album was a filthy, funky and super-sexy epic jam session. It was our introduction to the album with an unpronounceable symbol as its title and a mixed bag of music that hopscotched from one musical style to the next. For a lesser artist that might have been a bad idea, but for Prince, the release of O(+> was yet another ambitious chapter in his storied career.

O(+>, also referred to as the Love Symbol Album or just shortened to Symbol, was released in the fall of 1992 and is wedged in his discography between the well-received commercial and critical success Diamonds and Pearls in 1991 and the darker, at times meandering Come in 1994. This was Prince's second album with The New Power Generation and you could hear more of them on this set. You could especially hear NPG member rapper Tony M. who assisted his Purple Majesty by spitting bars on a few cuts, including the aforementioned "Sexy M.F." and the second single, "My Name Is Prince," a cocky and catchy hip-hop meets New Jack Swing number. Now when you think of Prince, the last things you probably think about are hip hop and New Jack Swing, but in an attempt to keep up with the sound of the era, Prince decided to dibble and dabble and his gamble worked on this particular track. Prince and The NPG jumped from genre to genre on O(+>, taking turns at everything from funk to reggae to jazz. A casual Prince listener may not have known what to do with this album since it was kind of all over the place and some of the songs ("The Max," "The Flow") had a little too much going on and just got lost in a cacophonous sauce.

Other than a few questionable songs, the only other suspect aspect of O(+> were the segues between certain tracks featuring conversations between Prince and roving reporter "Vanessa Bartholomew," voiced by actress Kirstie Alley. These spoken interludes were apparently a carryover from the original version of the album, which was conceived as a "fantasy rock soap opera," but they had to be edited for length and on the final version they came across as random and out of place, interrupting the record's flow.

The singles that were released from O(+> were strong, but there were a handful of album cuts that could have made the cut and gotten released as singles. "Love 2 The 9's," "Blue Light" and "And God Created Woman" all had legs to go the distance. This trio of tracks are actually my personal favorites from his album. "Love 2 The 9's" was a lighthearted and jazzy jam that slipped some hip-hop flavor in and an amusing conversation between Tony M. and Prince's future wife Mayte Garcia punctuated by commands to "Let me see the booty boom!" Prince and The NPG revisited reggae on "Blue Light," a fun slow-wining song about lovers who love hard and long. The strongest of the non-singles was "And God Created Woman," which would have been the perfect prelude to "The Most Beautiful Girl In The World," which would later be released in 1994.

At the time this was released, I have to admit that it had to grow on me. I'm a die-hard Prince fan, but it wasn't love at first listen. It took me a while to really get into this album and appreciate what Prince was doing. As it turns out, this would be the first of many subsequent Prince albums that I'd feel this way about, but, really, Prince can do no wrong even if he always doesn't do right.

Although O(+> won't be remembered as one of Prince's best, most successful or game-changing albums, it was one of his most innovative. He took risks that worked in his favor for the most part. In a world where audiences are content with artists releasing the same album over and over again, Prince has consistently switched it up and kept us on our toes and with our ears wide open.