You & Your ‘Mama’ Will Like Big Boi & Little Dragon Together 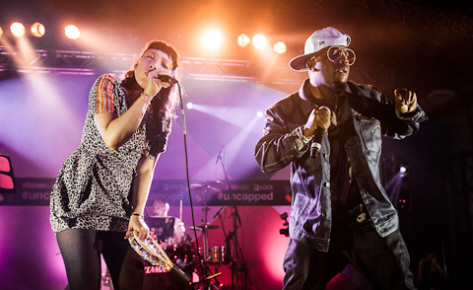 Oh the tug of war I am in about "Mama Told Me," the super fly synth-a-thon track that Big Boi has graced us with this year. It's a (petty) conflict of sorts where I'm trying to figure out which version is the best. Is it Kelly Rowland's animated R&B refrains that snap, crackle and pop? Or does Little Dragon's trendy Wayfarers sportin' vibe rule the roost? Well, to heck with all that fussing and tugging, as I truly like them both in their various guises, plus isn't it better to have choices anyway? At the moment, Little Dragon's version is speaking to me, as the official studio version was released over the weekend sounding all nice and glossy. Also, as you know, the reason for the change of vocalist was due to some icky record label issues, but that was all water under the bridge when the Swedish quartet and Sir Luscious Leftfoot took to the stage on Late Night with Jimmy Fallon this past Friday, blazing their way through their collaboration, which you can dig after the bounce. Pretty much this whole audio/visual deal is a reminder tied like a string around my finger to keep in mind that Tuesday is when Big Boi's long-awaited album, Vicious Lies & Dangerous Rumors finally drops.


TAGS:  audio, big boi, jimmy fallon", kelly rowland", little dragon
Previous: John Legend Is Out For Revenge On ‘Who Did That To You?’ Next: Mark de Clive-Lowe Introduces Us To The NEXT Collective