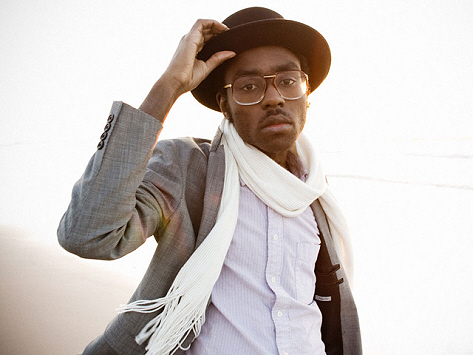 Last year Dev "Blood Orange" Hynes worked his synthesized charms around me enough to confirm that he is one to watch out for in the music producing world. Though other folks were a bit mum on it, you can't forget how he expertly produced Solange's wonderful True EP, deactivating the Knowles clone gene within, and transforming her into indie's new glossy princess. He truly deserves all the Edible Arrangements in the world for that. While his robotic vocals slightly marred the goodness that was True's "Some Things Never Seem To F*cking Work," Hynes is giving vocalizing another go as for funsies he's covered fellow Briton act Kindness and his track "Cyan." Now don't cringe just yet, as Hynes links his signature murky one-note synth technique with the percussion backing from Sky Ferreria's "Everything Is Embarrassing" (which was one of my top 10 songs of last year) to make for an insulated mood piece -- and, well, he doesn't come off bad. Okay, sure he sounds a helluva lot like a plastic version of Prince (yes...you heard it, too) and toning down "Cyan" from the funky stepper it was is a risk I wouldn't take, but if you find yourself drawn to the throwback choose-your-own-John-Hughes-movie-soundtrack-adventure style that Hynes does so well, you'll gobble it up too as I did.