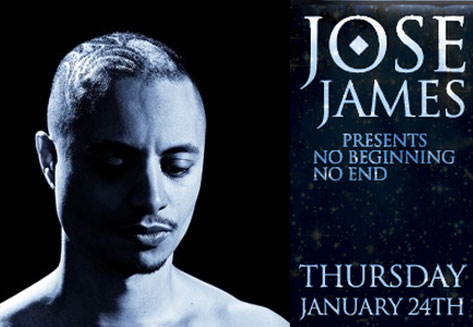 Today is the day that José James' fans have been longing for with his new album, No Beginning No End, finally in stores now. In the hours since its release, it's already hit #1 on the iTunes R&B charts in several countries. Not bad at all for his Blue Note debut. Mr. James will be making a debut of another sort this Thursday, January 24th at the Howard Theatre in Washington, DC. This will be his first show at the venue and opening up for him will be Christie Dashiell of the group Afro-Blue, our favorites from the third season of The Sing-Off a cappella group competition show. For lovers of jazz and soul in the DMV, this is one event that needs not be missed. Our friends at the Howard Theatre have given us a pair of tickets to give away to one local Bouncer, and all you have to do to win is to fill out the entry form after the bounce. Tickets are also on sale at TicketMaster or the venue's box office.
Center


TAGS:  afro-blue, Christie Dashiell, jose james, The Howard Theatre
Previous: Do We Care That Beyoncé Lip-Synced The National Anthem At Inauguration? Next: Morning Soul: Take A Lot More Than You To Get Rid Of Me