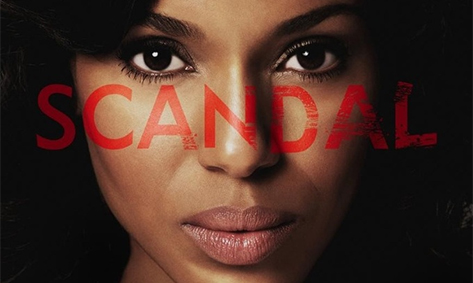 For a complete hour tonight the world will stand still and televisions across the nation will sync up, as many of us will sit with jaws dropped as we tune in to the return of Shonda Rhimes' latest hit primetime series, Scandal. With Kerry Washington serving as the first African-American actress with a lead role on network television in 38 years, Scandal grabbed our attention in early 2012. But it was the groundbreaking, intense and anxiety-inducing plot coupled with a surprisingly soulful soundtrack, which kept us watching. Before you turn to Netflix or Hulu for your own Scandal marathon to get you ready for tonight, let's take a quick look into the most scandalous music moments the series has offered up thus far.
Center

As the first season and pilot episode began, we were introduced to Olivia Pope and her team. There was a specific scene where Abby, played by Darby Stanchfield, slithered and schemed her way on to a crime scene to take pictures. This moment was pushed along by the Staples Singers' 1971 Billboard Hot Soul Singles hit "Respect Yourself." Something about this song notified viewers that Olivia and her team were about their business and would indeed get the job done. From there on out, whenever the "gladiators in suits" were to head out on a mission, songs from soul greats like Sam Cooke, The Isley Brothers, Otis Redding, Stevie Wonder, The O'Jays, James Brown, Edwin Starr and Curtis Mayfield were played, intensifying the moments.

There are also the more haunting musical moments. Such as during the first episode of the second season where "The Light" by The Album Leaf was played as President Grant, his wife and his mistress, Olivia Pope, discussed their options. During a heated period in the episode entitled Spies Like Us, where Abby spirals after arguing with her love interest who doubles as Olivia's foe, the voice of Nina Simone chants through "I Think It's Going To Rain Today." But the greatest and most haunting soundtrack choice to date was when the world was introduced to Bettye Lavette's eerie rendition of Gnarls Barkley's mega-hit "Crazy" during the attempted assassination scene.

As we prepare for the second half of the second season, we look forward to hearing more soulful sounds combined with the undeniably genius producing prowess of Shonda Rhimes. Tune in to Scandal tonight on ABC at 10 pm EST/PST, and check out ABC's Music Lounge website to keep updated with the show's impeccable soundtrack choices.