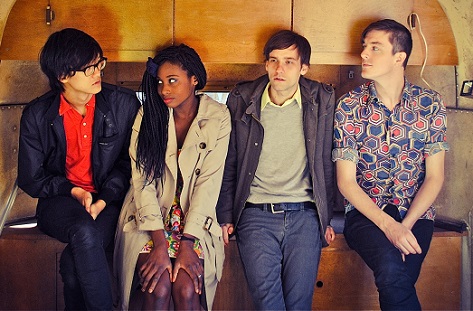 Electro-pop-R&B outfit Body Language seems to be the group that keeps on giving. After releasing their Grammar EP, the quartet seemed to have kept a relatively low profile. That low profile was mainly because they were putting more work in behind the scenes. They've got a new full length album that they're currently prepping for release this summer. To celebrate, they're re-releasing last year's Grammar with two additional tracks "The Chasing" and "What's the Point." Both are disco-ready jams that are sure to get you dancing. And, because they love us so, the entire five-track set is being released as a free download. In addition, at the end of this month they'll embark on a short tour with indie act Vacationer on their way to playing SXSW in March (and, if you live in NYC, you'll be able to catch their video playing eight times an hour on the side of the American Outfitters building in Times Square). You can listen to Grammar after the bounce and head to the group's website to download it and get tour dates.