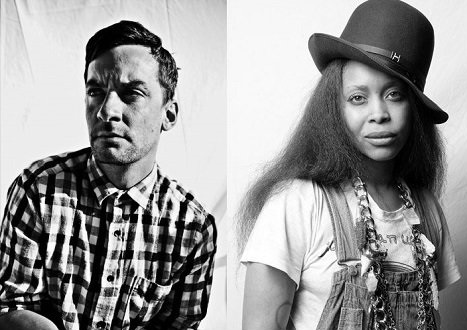 Bonobo is gearing up to release The Northern Borders, his follow up to 2010's Black Sands, on April 1st this year. We've already sampled the delicious downtempo "Cirrus" and were clamoring for more. Now we get a taste of one of the set's biggest features. Neo-soul originator Erykah Badu breaks bread with Bonobo on the track "Heaven for the Sinner." Ms. Badu, who continues her streak of collaborating with eclectic electronic producers, shines on Bonobo's trippy cut. Utilizing a murky groove filled with distorted vocals and stutter stop drums, Erykah's voice floats and weaves hazily throughout the track. Similar to her collaboration with Flying Lotus, Erykah puts her own stank on the record while still allowing Bonobo's style and production to get all the shine. Ms. Badu isn't the only contributor who adds some spark on the upcoming album, either. Expect features from Bounce-Worthy artist Szjerdene, Cornelia and Grey Reverend as well. The Northern Borders might be coming out on April 1st, but based on this, you'd be a fool not to pick it up. [H/T: PB]