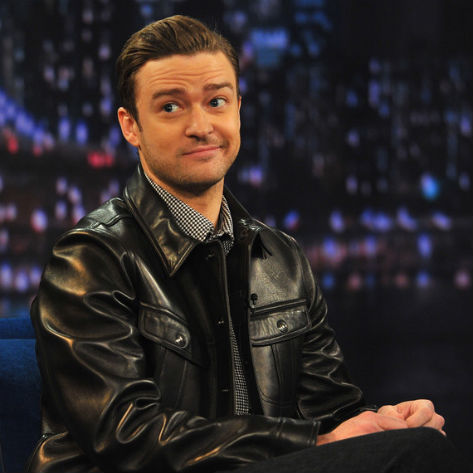 So unless you've totally unplugged from the matrix for the past 24 hours, then you've more than likely already heard Justin Timberlake's new album, The 20/20 Experience, either via its exclusive iTunes preview or perhaps added the album to your collection thanks to it subsequently springing more leaks than the Titanic. Whatever the case, this past day has only been the tip of the Timberlake iceberg. There'll be no escaping him in 2013, least of all this week with his television takeover of NBC's late-night schedule. What began this past weekend with him pulling a double on Saturday Night Live as host and musical guest has carried over into a five-night stint on Late Night with Jimmy Fallon.
Center

"Justin Timberweek," as it's been billed, kicked off officially last night with Timberlake having a joke-filled sit-down with Jimmy Fallon before closing the show with a performance of "Pusher Love Girl." Trading in his "Suit & Tie" for a more laid back look, JT was once again backed by his band The Tennessee Kids (who make all of his live performances worth watching in my opinion) and it was quite a soulful affair. JT's falsetto was on point and the band's gospel-influenced flourishes (the background harmonies, the organ) combined to make this one of his better live TV showings from the many that he's already done to promote The 20/20 Experience's March 19th release. He's at it again on Fallon tonight (and tomorrow, Thursday and Friday), so get ready for another track from the album or possibly a throwback from his catalog to get the live treatment. Until we find out what Timberlake is gonna break us off with, enjoy this mini-concert of "Suit & Tie" featuring a cameo from Jay-Z and "Mirrors" from SNL and "Pusher Love Girl" on your computer.