Mariah Carey's contribution to the Oz: The Great and Powerful, had some big shoes to fill, especially because it's the cinematic prequel to The Wizard of Oz -- which spawned the timeless, oft-covered "Somewhere Over the Rainbow." While "Almost Home" doesn't quite measure up to the Judy Garland hit's legacy, it is one of the better showings for Mariah in recent years. However, the video for the clip isn't exactly what you'd expect for a film about the technicolor world of Oz and it inhabitants, especially being that it's directed by eye-popping director and photographer David LaChapelle. Instead, the clip for "Almost Home" is downright subdued as Mariah walks around an empty room (looking glamourous, mind you) while clips from the film are played and wind blows her blonde tresses all about. While the clip does its job of showcasing the film (and she even shows some fake emotion with that single, solitary tear toward the end), it's definitely no "When You Believe." 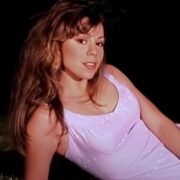