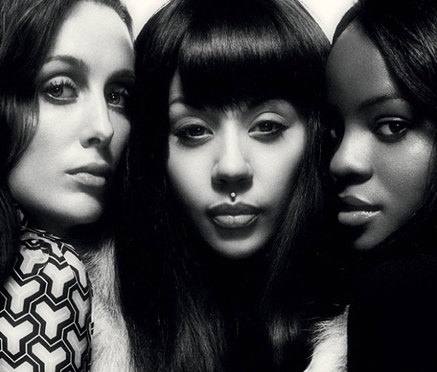 Take a step back to the year 2000 and there was a quirky UK teen girl group making waves in Europe. They weren't the usual sugar-coated girl group even though there name suggested as much, preferring to steer to the left of the norm at the time. They were the Sugababes. Over the years, the core group was steadily replaced with new members, until none of the original members were a part of the group. Now, some 13 years later the original lineup -- Mutya Buena, Keisha Buchanan and Siobhán Donaghy -- have reunited to create that magic that made the Sugababes so special in the first place. Bypassing a cheesy group name and sticking with their names of Mutya Keisha & Siobhán aka MKS, the girls are now ladies and bringing us some heat in the form of this Blood Orange-produced reinterpretation of Kendrick Lamar's "Swimming Pools (Drank)" on "Lay Down in Swimming Pools." The track showcases the captivating vocals, harmonies and street-cool attitude that caused me to fall in lust with these three as a young woman. Here's hoping that in the capable hands of Blood Orange the original Sugababes will deliver some more sweetly enticing grooves like this one and keep moving forward into their own as MKS.