Sharaya J Shows Us How To Be ‘BANJI’ 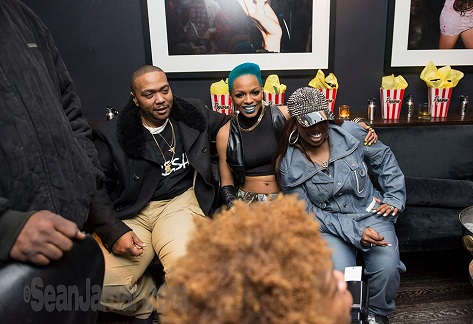 Sharaya J's video premiere party at Parlor didn't exactly go off without a hitch. Shortly before the New Jersey native's guests were to arrive, there was a glitch with the sound system, making it not possible to hear the video over the club's speakers. The hip hop newcomer (and Missy Elliott protégé) didn't let that stop her flow, however. With a little ingenuity, and some help from Missy, she was able to debut her video and song "BANJI" for the crowd -- which included tastemakers like Kid Fury and Missy's musical brother Timbaland. "BANJI," which is an acronym for Be Authentic Never Jeopardize Individuality (and is borrowed from the gay community's "banjee"), is a banger that finds the aspiring rapstress showing off not only her flow but her dance skills as well. She and her BANJI Babes get down in the clip like MC Hammer in his heyday as Sharaya's tongue-twisting flows bounce on the Baltimore club-inspired beat. As Missy said when introducing her, Sharaya J was coached to be like the type of well-rounded, versatile artist that is a rarity in this day and age and it shows. From her image (which, while wild and fun, is obviously something carefully crafted by her) to her professionalism, this chick is the real deal. You can learn more about Sharaya J by taking a look at her self-narrated documentary. To get a feel for her sound and style, peep the clip for "BANJI" after the bounce and be sure to keep an eye out for Sharaya J and her blue Gumby, because she's sure to do big things soon. [Photo: Sean Rhineheart]