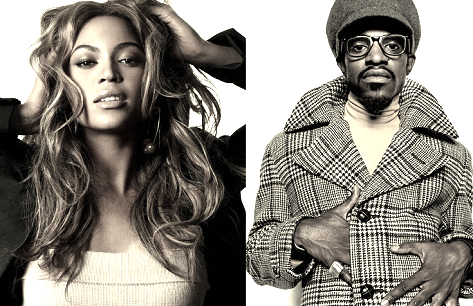 The soundtrack for Baz Luhrman's upcoming The Great Gatsby has made many folks scratch their head. While the super slick visuals and styling we've seen in the trailers speak to the 1920's setting that the film takes place in, the soundtrack selections seem bizarre and highly anachronistic for a film that takes place during the jazz age. But all that aside, the most anticipated track on the set was the remake of Amy Winehouse's "Back to Back" by Beyoncé and...Andre 3000? Yes, the unlikely pair decided to give the track a try, but did they do it justice?
Center

While the pair might have made trunks bump in 2011 on Bey's "Party," their take on Amy's modern classic is tone deaf. That's not only due to odd production choices (the drum machine and spaghetti western guitar riffs just don't work here), but also to the lackluster vocal performances. While Dre 3K's off-key sensibilities worked for his material on The Love Below, his inability to carry a tune is made even more pronounced here and his "singing" is damn near laughable. Beyoncé's turn at the mic is a bit more palatable, but Bey once again substitutes oversinging for emotion, robbing the song of its despair and heartbreak. The end result is a cover that's both undercooked and overdone. I'm not a believer that some songs shouldn't be touched, but if you're going to do a cover -- especially of a song so recent in the public consciousness -- you should either come correct or leave it be. Bey and Dre should've sat this one out.