Beyoncé Shows How Much She’s ‘Grown’ In New Pepsi Ad 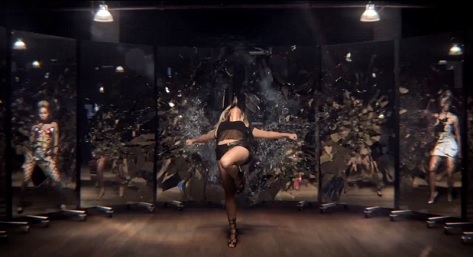 With Beyoncé's mysterious #BeyHereNow teaser released yesterday, the Internet and the Beyhive went into a tizzy speculating what it could be. Today, it was finally unveiled and it's...a Pepsi commercial. While that news is a bit of a letdown, it does bring with it a preview of a new song and some interesting visuals. In the Jake Nava-directed ad, we find Bey in a dance studio frustrated at her inability to get a dance move down. Then, after taking a magical swig of Pepsi, she's confronted by visions of her past performances and videos in the dance studio's mirrors. Rather than wonder if that was actually Pepsi she just drank, Bey opts to challenge her past selves to a dance off where present day Bey, of course, reigns supreme. During the clip, we also get a brief taste of the Timbaland-produced "Grown Woman." Though it's not enough to make a full assessment of the song, I must say that it's kinda nice to hear Bey over Tim's signature syncopated rhythms (as opposed to the other ratchetry the two have been a part of) and we're very anxious to hear more. In other Bey news, she's teaming up with Andre 3000 on the upcoming The Great Gatsby soundtrack to cover Amy Winehouse's "Back to Black." While the jury's still out on how great (or not) it will sound, a very brief bit of it can be heard in the film's latest trailer. But enough about all that, check out Bey vs. Bey (vs. Bey...) after the bounce.

TAGS:  amy winehouse, andre 3000, beyoncé, jake nava, timbaland
Previous: Morning Soul: It’s Like The More You Give, The More I Want Next: Will You Make A Behind The Scenes ‘Connection’ With Raheem DeVaughn?