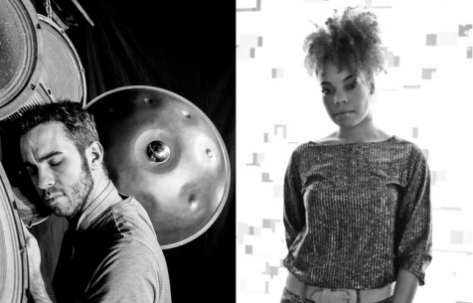 I have been itching to hear more from Andreya Triana since her outstanding debut album, Lost Where I Belong, dropped back in 2011. This year she is set to follow up with both an EP and her sophomore set, but to tide us over until then we have this strikingly beautiful collaboration with Manu Delago. Hailing from Austria, Manu is a drummer, composer and hang player who has worked with Björk and the London Symphony Orchestra. For those of you who like myself may be wondering what a hang is, it's a UFO-shaped steel percussion instrument that is played with the hands and gives off a sound that is somewhere between a lighter-sounding steel drum and traditional Middle Eastern percussive instruments. Manu is readying the release of his latest album, Bigger Than Home, and "A Long Way" is the first single from the project which shows off both the collaborator's strengths. Triana is completely mesmerizing, as always, and Manu's hang playing is both soothing and engaging. I'll be keeping an eye out for this album when it drops this Friday.


TAGS:  andreya triana", audio, bjork, London Symphony Orchestra, Manu Delago
Previous: Morning Soul: Shine For Me To Find Out Where You’re Coming From Next: Laura Mvula Is Better Than ‘Alright’