Home I Was There, Industry & Culture, SoulTube, Video SoulBounce

Tamar Braxton Shares A Bit Of Her Own ‘Family Values’ 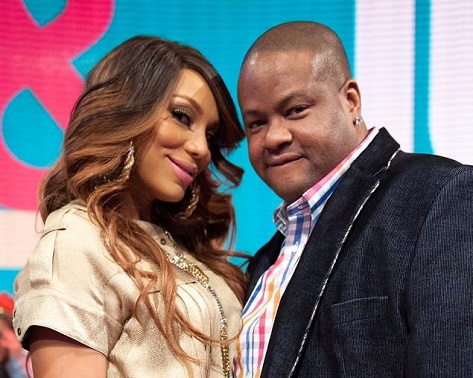 Though she had a relatively minor hit back in 2000 with "If You Don't Wanna Love Me," audiences didn't really get to know Tamar Braxton until her and her sisters resurfaced on WEtv's hit reality show Braxton Family Values. Last week, I (and a few other journalists) had the pleasure of watching the "Papa Knows Best" episode of the show with the divalicious (and very pregnant) dynamo and her husband/manager Vince Herbert. During the course of the evening, we not only got some insight into the admittedly intense bickering between the Braxton sisters featured in the episode, but also a dose of Tamar's wicked sense of humor and a taste of what the talented artist has in store for us musically.
Center

During the episode, which focused on the infighting among the sisters and, specifically, their problems with youngest sibling Tamar, it seemed the Braxtons were holding a "Tamar-vention" and the burgeoning diva wasn't having it. Even as she sat in the conference room with us, she was very vocal about her disapproval. She blurted out "She tried it!" more than a few times and when asked about what sparked the sometimes rivalry with sister Traci Braxton she replied with a simple yet flabbergasted "I don't know!" It was also obvious at times, even with all the laughing and her hilarious commentary, that watching something so personal unfold on television was a bit uncomfortable for her. Still, it's an experience that comes with the territory of being a reality star.

Even so, between Vince being an in-demand manager and producer, Tamar's burgeoning music career and filming Braxton Family Values and the couple's own show, Tamar & Vince, it's hard to imagine when the twosome have time to have a private moment.

"At night," Tamar deadpanned when I posed the question.

"Don't you see that bump up there, boy?" Vince followed up, causing the room to erupt in laughter.

Speaking of Tamar's baby bump, she also mentioned that it took her a while to tell her sisters about her pregnancy. She called them "Tell-It-Tubbies" and said she was afraid that they would spill the beans too soon. Playful nicknames aside, Vince and Tamar assured us that the sibling rivalry showed in the episode was all just a part of the growing pains of being a family. And, as if to prove that there was no love lost, Toni called Tamar during the show to ask about one of the Braxton girls' favorite topics: wigs.

Another favorite topic that Tamar was happy to speak about was her upcoming album. With "Love And War" already making a mark, she told us about what we can expect from the set. "It's definitely R&B driven," she said. "It's more like throwback R&B, the type of songs that you used to love during the summer." To further give us a feel for the set, we were told about the set's next single. While I can't reveal much about it (we were pretty much sworn to secrecy), I can say that it delivers on the throwback feel that Tamar promised and will definitely be bumping on speakers throughout the summer.

Until the album's release, you can get your Tamar fix (along with the other Braxton sisters) as the girls continue to hash out their differences on tonight's episode of Braxton Family Values. Check out a preview below.