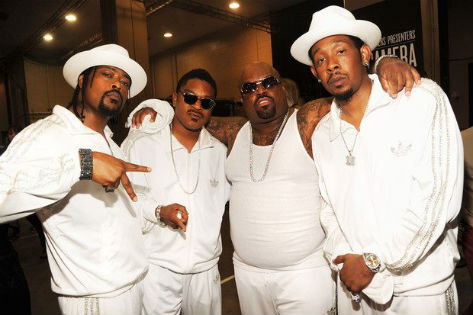 It's been quite a while since we've heard from the Southern fried collective Goodie Mob. Thankfully the group seems to have kissed and made up since the departure of CeeLo Green (and the album mocking the rotund member, but I digress). The latest offering is "Special Education," which finds the collective rapping over a sonically futuristic backdrop with a heavy distorted bassline. It doesn't hurt that they recruited vocals from "Q.U.E.E.N." Janelle Monáe who adds the perfect compliment to the energy of the song. Even T-Mo, usually known for being the weakest link, sounds pretty damn dope in the song. Thankfully this taste from their upcoming album Age Against the Machine is a noble effort from Goodie Mob as we've seen previous hip-hop group reunion singles fall short. Remember that Fugees record from a few years ago? Exactly. Me neither. This song isn't exactly the strongest work that we've heard from the dirty South clan, but it's something that clearly explores the growth of these artists and a fearlessness to sound different. Now, if we can only convince Andre 3000 and Big Boi to follow suit.