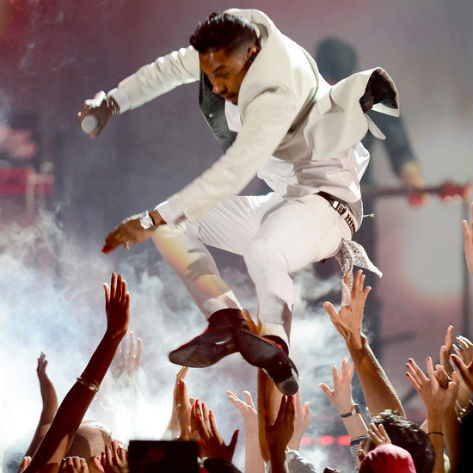 What should have been a routine performance for Miguel at last night's mostly forgettable Billboard Music Awards turned into the stuff Vines, gifs, memes, Twitter trending topics (including our very own Butta's #MiguelsPlaylist) and snarky bloggers' wet dreams are made of. It all started off harmless enough. Boogaloo Shrimp (my affectionate nickname for the pint-sized crooner) was yet again performing his hit "Adorn." It was a passable showing for the most part...and then shit got real. Employing skills he learned from the School of Needlessly Dramatic Stunts and Shows (otherwise known as the WWE), Miguel thought it would be a good idea to do his best Rocky the Flying Squirrel impersonation and hop, over a crowd, to the next stage. I'm not sure what got into him (The Holy Ghost? The spirit of Peter Pan? Powdered backstage courage?) that made him think his short, tight white pants-clad legs could carry him such a distance, but he learned the hard way what most of us already knew: shrimp can't fly. Unfortunately, some poor unsuspecting girl had to pay the price as her face got adorned with his inner thigh and the back of her head and neck met the stage (probably not how she envisioned the night going). Not one to let a potential lawsuit in the making or a girl slumped on the floor in agonizing pain mishap get in the way of a good performance, Miguel soldiered on, even temporarily thwarting a crowd rescue attempt by pulling a few audience members in for a camera opp. He's so considerate. Luckily, Khyati is okay (and I have a feeling her pockets are about to be swole). Check the high-flying performance below and get a taste of Butta's Hot 16 #MiguelsPlaylist on Spotify after the bounce.
Center 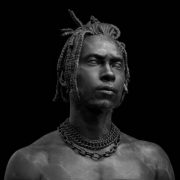 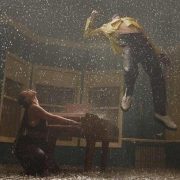