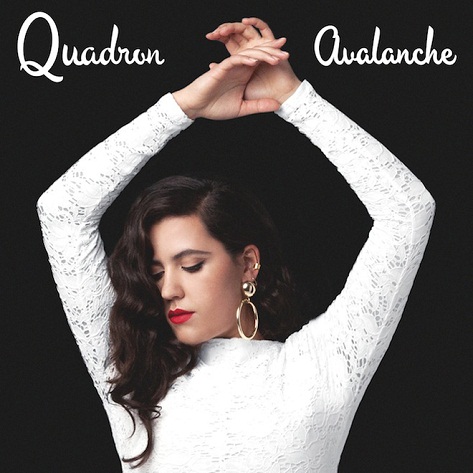 It's been nearly four long years since the world's mind was collectively blown by Danish soul duo Quadron's self-titled debut album. Featuring an icy cool blend of soul, jazz and electronic elements, producer Robin Hannibal and vocalist Coco O. breathed new life into a genre that many thought was on its last legs with songs like "Average Fruit," "Day" and "Simili Life." Upon news of their major label signing (to Sylvia Rhone's Vested In Culture imprint under Epic Records), many feared that the duo's unique and original sound would be watered down for the record buying masses. However, their sophomore set and major label debut Avalanche should quell those fears. While there are definite deviations from their original formula, the changes in sound and style feel organic, not forced. Avalanche not only finds the duo growing in their talents but also reveling in, reforming and reshaping their influences.
Center

The album kicks off with the '80s vibe of "LFT" (which is an acronym for "Looking For Trouble"). Though Coco has been performing this joint on tour since last year, this ode to getting together with her girls is still fresh-sounding in its recorded form and a great lead in to the funk of "Favorite Star." Bass driven, "Star" is the first sonic change-up from the twosome. Where most songs on Quadron barely made it to mid-tempo, this one almost begs you to two-step to it the minute the chorus comes in. In good company with it is lead single "Hey Love," which was co-produced by Hannibal and Fraser T. Smith, which is a frenetic foot stomper that takes Quadron in a poppier direction without sacrificing the hallmarks of their established sound (namely, the extraordinary chemistry between Coco's voice and Robin's slick production).

"Crush" and "Befriend" are perhaps the closest cousins to Quadron tracks included on this set. "Crush" is reminiscent of "Horse" and "Unpatience" with Coco treading familiar ground as she recounts a love that has yet to be requited. "Befriend," on the other hand, feels similar to "Far Cry." Both songs benefit from Coco's ability to draw a beautiful fragility from her vocals and Robin's ear for soundscapes that evoke emotion effortlessly, creating mesmerizing pieces that strike a chord with the audience.

The three songs that follow invoke the spirit of Michael Jackson, an artist whom Coco credits as her first love and biggest influence, picking up where their popular cover of "Baby Be Mine" left off. "Neverland" is a direct tribute to MJ, with the lyrics calling out those trying to impersonate the star instead of letting there own style shine. "It's Gonna Get You" opts to mine the sound of early '80s Michael and Stevie Wonder efforts with tight harmonies and enchanting synth arrangements and a playful spoken interlude from Coco. "Better Off" features the album's only guest spot, from hip-hop man of the moment Kendrick Lamar, but it's Robin's blissful "Can't Help It"-inspired production and Coco's delicate vocal that truly are the stars here. The deep bass groove adorned with horn flourishes allows Coco's voice to fluctuate from breathless whisper to full-voiced cry easily.

The album ends with two tales of heartache: the bittersweet "Sea Salt" and the achingly beautiful "Avalanche." The former adds a slight tropical feel to melancholy as Coco languishes in a salty sea of tears as she tries to mend a heart broken once again by a careless lover. "Avalanche" eschews the drums and bass grooves of the previous tracks, instead opting for quiet strings and subtle piano as Coco sings of the loneliness one faces at the end of love. It's an especially haunting, tender ballad and an emotionally poignant end to the 10-song set.

In nature, an avalanche can be caused by melting snow. The same can be said of Quadron's Avalanche. The icy cool of their debut has melted, giving way to a warmer more realized sound. This isn't a change for Coco and Robin as much as it's an evolution for the duo. Four years and countless collaborations and side projects have allowed each to mature separately and that maturation has made their undeniable chemistry even stronger. If there is one drawback to this stellar set, it's that, with only 10 songs, it leaves you desperate to hear more.