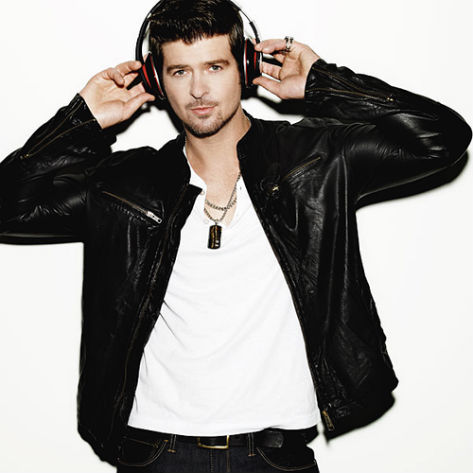 So it's unofficially officially Robin Thicke week on these here internets with his label Interscope Records unveiling a new song a day from his upcoming album, Blurred Lines. The record doesn't drop until Tuesday, July 30th, but we'll be jamming until then to the songs that we've heard, especially the two latest. "Ain't No Hat 4 That" is a Thicke family affair with Robin's dad Alan Thicke providing an assist on co-writing and son Julian Thicke dropping a hot one on the intro. Sonically the track is the lovechild of Stevie Wonder's "Do I Do" and Michael Jackson's "Don't Stop Til You Get Enough," and it's as good as you'd think a mash-up of those two jams would sound. "Ain't No Hat 4 That" will make you want to do an old school dance or five, whereas "Feel Good" may lead you to break out into some Jersey Shore-style fist pumping but with a lot more rhythm. The track is produced by will.i.am, but we won't hold that against it as Robin's soul hasn't been sold or lost on the thumping party starter. From what we've heard thus far, Blurred Lines is sounding like it'll be the soundtrack for the rest of the summer. Well played, Mr. Thicke.