Home Events, Pause For A Cause 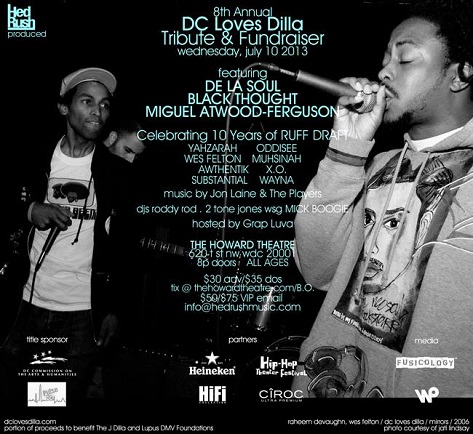 If you're a fan of A Tribe Called Quest, De La Soul, Busta Rhymes or Common, then you are more than familiar with James Dewitt Yancey. Affectionately known as J Dilla, the rapper/producer's untimely death in 2006 left a wound in the hip-hop community that still stings. To ease the pain, the J Dilla Tribute Concert and Fundraiser, affectionately dubbed DC Loves Dilla, revives and celebrates the life of J Dilla with a number of artists and special guests. Black Thought of The Roots, composer and producer Miguel Atwood-Ferguson and GRAMMY Award-winning group De La Soul, who, after a decade hiatus, will release new album You're Welcome later this fall, have been selected to recreate the energy of Jay's music during the exclusive fundraiser at the Howard Theatre. Be sure to check out the special guests, fellow fans and family on Wednesday, July 10th at 9:00 pm. Proceeds will benefit the J Dilla Foundation and The Lupus Foundation of Greater Washington, DC. For more information about the event check out HeartDilla.com.
Center