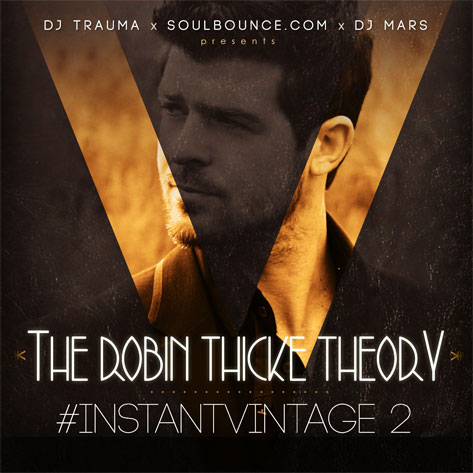 It's safe to say that Robin Thicke is the man right about now. He's got an international hit on his hands with the song "Blurred Lines," which is still going strong months after dropping in March and has fans from eight to eighty (despite the sketchy subject matter). But "Blurred Lines" isn't Thicke's first time at the rodeo. On July 30th he'll release his sixth album, and what better way to celebrate this occasion and his revitalized career than with a retrospective of his past work? And who better to do just that than DJ Trauma and DJ Mars who took a stroll through Robin's catalog to hook up The Robin Thicke Theory, the second mixtape in their #InstantVintage series in association with SoulBounce. If you loved what Trauma and Mars did with their Raphael Saadiq The Sounds of Saadiq #InstantVintage mixtape, then you are going to lose your mind when you press play on this joint right here. These two World Famous Super Friends curated selections from all of Thicke's albums -- from singles to album cuts -- alongside remixes and interview clips to create a mix that you'll keep in heavy rotation. Check the full tracklist after the bounce to see what goodness is in store. Get into the groove of The Robin Thicke Theory right here, and avail yourself of the mixtape with the free download right now.