Mariah, Miguel & Jeezy Were A ‘#Beautiful’ Mess On The BET Awards ’13 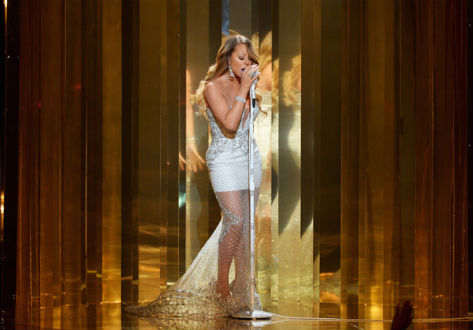 Mariah Carey opened up her performance at Sunday night's BET Awards '13 in true Carey style, with a gorgeously arranged intro reminiscent of Deniece Williams' "Free." But soon it became clear both Carey's and her "#Beautiful" duet partner Miguel's mics were purely ornamental. They were joined on stage by rapper Young Jeezy who helped perform the just-released remix (number three of five) before closing out the set with an awkwardly tacked-on verse from his single "R.I.P." We don't know what was behind the decision to lip-sync this performance, but that the rapper was the only one on stage with a functioning mic is a cruel irony. (As is the fact that Mariah Carey and Ciara performed at the same event, and only the latter did a live vocal.) We don't know what's going on on Team Mariah right now with the album pushed back and lazy remixes, but hopefully when the singer is finally ready to promote The Art of Letting Go she'll do it all the way live. If for no other reason than that she's a stellar singer and a terrible lip-syncer.