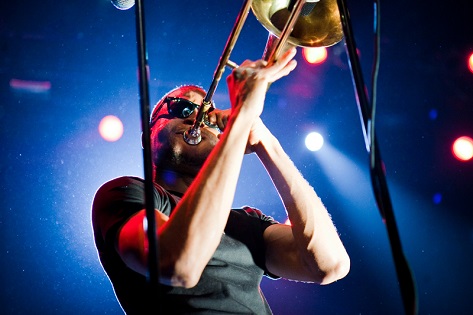 The last time we heard from New Orleans' golden boy Trombone Shorty, he was lending his formidable musical talents to Andy Allo's "People Pleaser" and enriching Mark Ronson's musical gumbo on "A La Modeliste." Now the trombone virtuoso is back with his own thing in the form of his upcoming album Say That To Say This. The first single to be lifted from the set is "Fire & Brimstone," a track that merges Shorty's jazz sensibilities with blues and rock. Over a thick bass line and buzzy electric guitar, Shorty croons about his struggles before shirking them off and proclaiming that he'll be "the greatest man alive" because of his ability to move a crowd with his trombone. While the single isn't my absolute favorite of Shorty's, I can't argue with the sentiment that his trombone has taken him to some amazing heights and will definitely continue to do so. You can check out "Fire & Brimstone" below and keep an eye out for Say That To Say This, which will arrive on September 10th. [H/T: NOLA]