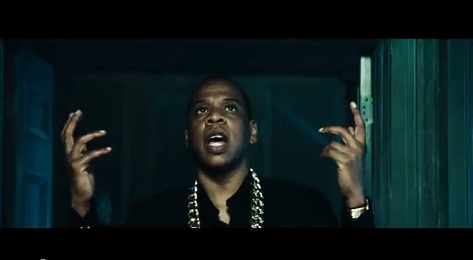 Back when Jay Z's Magna Carta...Holy Grail first dropped in July, folks were practically foaming at the mouth at the album's opener, the Justin Timberlake-assisted "Holy Grail." As a somewhat fan of Jigga's older works and a somewhat fan of Timberlake's more recent stuff, I hoped the song would meet somewhere in the middle and move me as much as it had seemed to move everybody else. After finally checking it out, it still left me feeling kind of blah, as much of Jigga's recent music has. While I wouldn't walk out of a store if it were playing as background music, it wouldn't necessarily find its way to my iTunes either. So with the buzz surrounding the new video and his chosen method to release it -- via Facebook -- I gave it a second shot in hopes that the visuals would move me in a way the song itself had failed to. Full to the brim of dark, brooding shots, the video feels more like a old Kanye West clip than a Jay Z one. Mr. Carter even seems to be doing his best Yeezy performance impression with his flailing arms and aversion to looking directly into the camera. Even Justin seems to dial it in as he sings to a room of white cloth-draped women and standing amidst raging flames. And then again, maybe I'm just reading too much into it all, instead of just enjoying "Holy Grail" in all of its woe-is-me-glory.