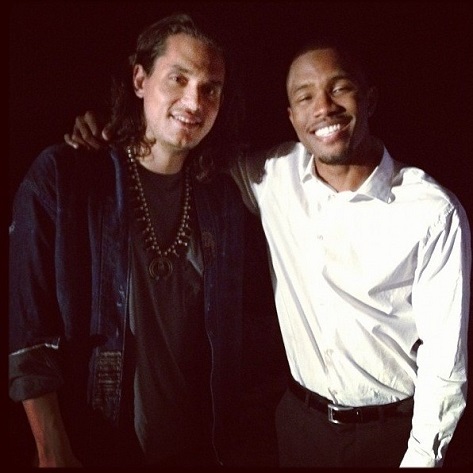 Guitar hero John Mayer is on the promo trail for his latest offering Paradise Valley, the singer/songwriter's first album since he had a granuloma removed from his vocal chords three years ago. But John's not coming back alone. The album will feature a duet with pop tart Katy Perry and also a collaboration with Frank Ocean himself. Frankie O's feature will come near the end of the album on the short but sweet "Wildfire." John, who featured on Frank's channel ORANGE last year, doesn't deliver any vocals on the track, allowing Frank to take over the show. The song, it seems, is more in Frank's wheelhouse as it deals with a love story that ultimately ends in heartbreak. Like many things on ORANGE, it's moody, melancholy and bittersweet. In other words, it's beautiful. Paradise Valley will be released this coming Tuesday, August 20th. If you're a Mayer (or Frankie O) fan, you can check out "Wildfire" after the bounce and head over to iTunes to stream the album in its entirety before its release.