Sean Paul & Damian Marley Have A ‘Riot’ Goin’ On 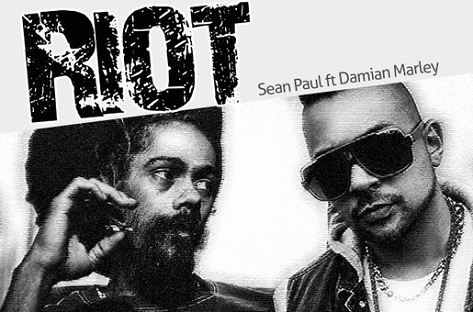 The last track we heard from Sean Paul, "Other Side of Love," was an Auto-Tuned EDM mess that left us yearning a time when Sean was getting busy at basement parties. So you imagine that I approached his latest offering with a bit of trepidation. Luckily, after pressing play on "Riot," I don't hate it. Not that I love it, either. It's a passable offering, marrying Sean and guest Damian Marley's dancehall flavored rhymes with the current "trap music" trend in EDM. The combo provides enough bump to nod your head to and allows the duo to nimbly showcase their patois-laden wordplay. However, the blips, beeps and buzzing become pretty grating after a while, taking you out of the mood the song initially sets at its start. Also off-putting is the refrain in which the two exchange an odd back-and-forth in which they describe each other's hairstyles and Damian mentions Sean is "colder than a cold sore" (at least I think that's what he says). Still, this joint should be hot enough to bring back the fans that were dismayed by "Other Side of Love." Give it a spin and let us know what you think.