Bad Rabbits’ ‘Dance’ Doesn’t Go Over So Well On ‘Arsenio’ 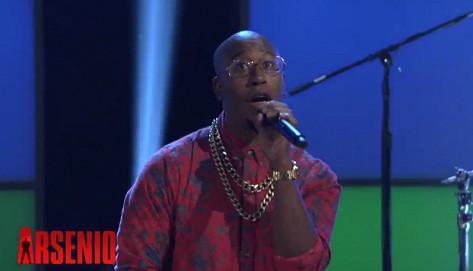 Everybody (or every band) has an off day, and unfortunately for Boston-based crew Bad Rabbits, theirs just happened to be on last night's episode of Arsenio. Performing their New Jack Swing jam "Dance With You," the band had a few stumbles. First, singer Fredua Boakye's vocals were slightly off, sounding a little strained and hoarse at times. Second, when featured guest Clinton Sparks came for the dance break portion of the track, he brought along two dancers whose groove proved to be lacking. Not even Teddy Riley's vocoder could right the sinking ship. As to be expected, social media was aflame, with even Robert Glasper pondering what the hell was going on (and garnering a miffed response from the band in turn). That being said, the guys never lost their energy and even slightly redeemed themselves when they rocked out on their second song of the night, "We Can Roll." Though not a great showing this go around, hopefully one off day doesn't slow the momentum that the Bad Rabbits crew has going for them. In case you missed it, check out "Dance With You" and "We Can Roll" after the bounce.
Center