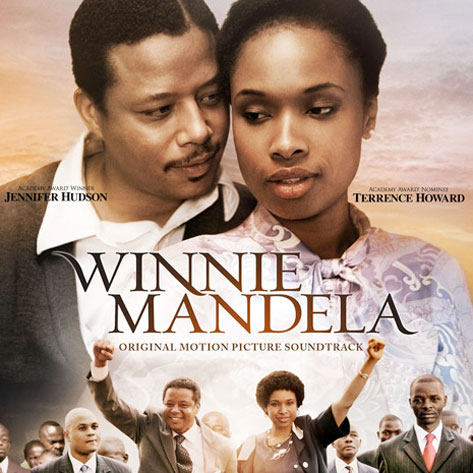 It's been a long time coming for the theatrical release of Winnie Mandela, a biopic starring Jennifer Hudson as Winnie Mandela and Terrance Howard as Nelson Mandela. The 2010 announcement about this film was met with controversy since neither the real Winnie Mandela nor her family were contacted or consulted prior to filming and questions loomed if Hudson could play the role properly -- Academy Award winner or not. All curious parties will get to see for themselves when the movie opens in theaters on Friday, September 6th. It's quite a curious matter that this film has taken such a long time to be released and isn't being met with much fanfare yet it is hitting the big screen just shy of two months before the release of Idris Elba's Nelson Mandela biopic Mandela: Long Walk To Freedom, which does have a lot of buzz. In addition to the movie sneaking into theaters this week, the film's soundtrack was quietly released on RCA Records. Winnie Mandela -- Original Motion Picture Soundtrack features the project's score as well as contributions from St. Teresa's Intermediate School Choir, Ben Amato, Ipeleng Moshe, Twalamato and the Manhattan Brothers. However, the big news to come from this soundtrack is that Jennifer Hudson has recorded a song with the Soweto Gospel Choir penned by hitmaker Diane Warren. "Bleed For Love" is a powerful ballad that finds Jennifer soaring as she sings about the power of love. This is a mighty fine vocal from JHud who doesn't over-sing or sing-yell to make an impact. I'm thoroughly impressed with what Hudson and Warren have done here, and with no news about any other new music coming from Jennifer's direction, this track fills the void. The Winnie Mandela -- Original Motion Picture Soundtrack is available now on Amazon and iTunes.