Justin Timberlake Takes ‘Back The’ Stage On ‘Jimmy Kimmel Live’ 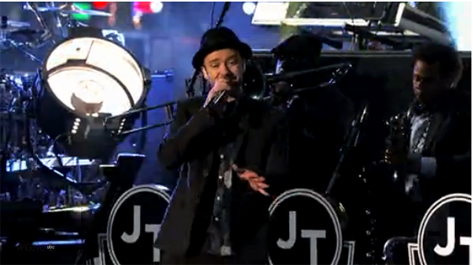 The Justin Timberlake oversaturation publicity machine kicked into overdrive this week now that the release of his second album in less than a year, The 20/20 Experience 2 of 2, and a new movie, Runner Runner, are upon us. Both due out next week (the album on September 30th and the movie on October 4th), he's literally left no television show's stone unturned in his effort to convince fans to shell out their hard-earned money for his talents twice in one week. Just this week alone he's been #Hashtagging it up on Late Night with Jimmy Fallon, sat down with Matt Lauer for a multi-part interview on The Today Show and awkwardly shared the couch with Paula Patton, wife of his "blue-eyed soul" arch nemesis Robin Thicke, during a Tonight Show appearance. Though he was too under the weather to perform on Jay Leno's talk show on Monday, Timberlake mustered up the energy to take the stage on Jimmy Kimmel Live the following day, where he performed a medley of songs including "Take Back the Night" and his most recent single "TKO." It's only the middle of the week and I'm quite honestly already burned out on JT, who seems to be here, there and every where each time I've turned my television on. While I like "Take Back the Night" enough, I was left feeling pretty underwhelmed by his performance. Perhaps it was the aftereffects of his cold or just my JT fatigue in general, but it felt an awful lot like Lazy Cell Phone Guy. His entire 15-minute set streamed live (and is still available) on Myspace, so if you haven't had your fill of what he's serving up yet, then you may wanna hop on over and see what underwhelming looks like Timberlake served up on Hollywood Boulevard last night. And if that's still not enough for you, you'd definitely want to check out the leftovers from The 20/20 Experience, currently streaming in its entirety here.
Center