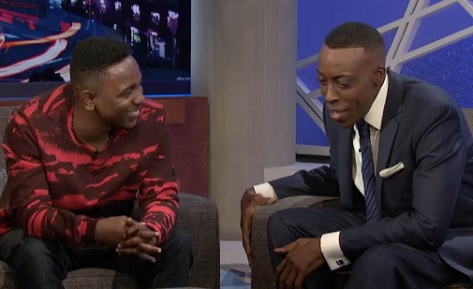 While initial reviews for Arsenio Hall's latest foray into late night television haven't been that favorable (at least according to the denizens of Black Twitter™), it can at least be said that last night he got something right. That's because he tapped good kid Kendrick Lamar (along with his Black Hippy associate ScHoolboy Q) as the musical guest for the night. Kicking things off right, Kendrick rocked through a rousing live version of his track "m.A.A.d. City" backed by his T.D.E. band that had everyone in the crowd nodding their head (we saw you over there, Holly Robinson Peete). But that wasn't all. After sitting down with Arsenio to discuss reminisce about his Compton upbringing, including watching the filming of the "California Love" video in his neighborhood, he took the stage with ScHoolboy Q to perform the absolute banger "Collard Greens." While there were more than a few bleeps during the song, enough got past the censors where its dopeness could be felt. Hopefully this is a sign that The Arsenio Hall Show will return to the iconic heights that it once hit years ago. Or maybe, at least, that Arsenio will update his musical guest list beyond the folks who topped the charts back in '93.
Center


TAGS:  arsenio hall, holly robinson-peete", kendrick lamar, schoolboy q, The Arsenio Hall Show
Previous: Ledisi Is Smiling Again & The ‘Blame’ Is On ‘You’ Next: Is Jaheim’s ‘Appreciation Day’ Worth Celebrating?