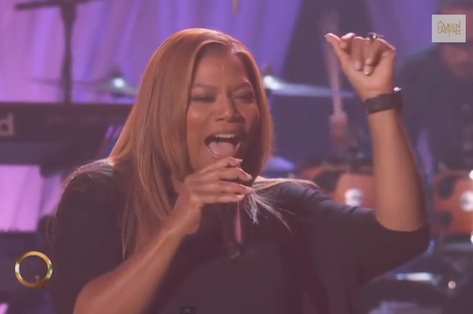 After being overwhelmingly disappointed with Arsenio Hall's return to late-night television last week, I was a little apprehensive about Queen Latifah's daytime television comeback this week despite my initial excitement. But I shouldn't have been worried, because after three episodes of The Queen Latifah Show she has a bonafide hit on her hands.

Instead of picking up where her previous foray into daytime television fell and left off, Latifah's new show is fresh, fun, funny and funky. She's an engaging and hilarious host who can pull in A-listers, has her own star power to carry the show, flexes both her comedic acting and musical chops with ease, gets involved with and gives back to the community in some way every day and even her set, nicknamed "Big Sexy" and furnished by none other than Lenny Kravitz, has personality. I'm all in and have already set my DVR to record all the episodes so that I don't miss a beat.

On Tuesday's episode her special guests included Will Smith, Alex Trebek and DJ Jazzy Jeff on the wheels of steel, which was reason enough to watch. However, it was later in the show when she paid homage to her mother with a song "dedicated to all the mothers out there who are raising their daughters to go out there and live" with a rousing performance of Frank Sinatra's "I'm Gonna Live Till I Die" (which she remade on 2007's Trav'lin Light) that Dana Owens got to shine. Her band was smoking (seriously, who is that drummer?), she looked fabulous and, most importantly, she sounded great. Consider me entertained and from here on out tuned in daily.