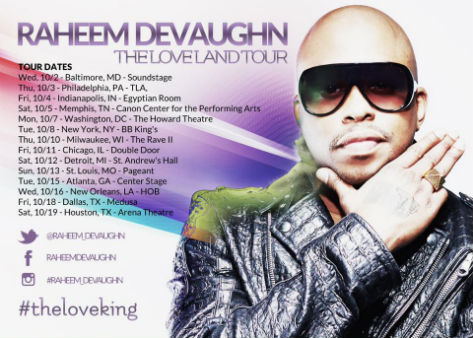 With the sheer volume of music that I am subjected to listening to as EIC of SoulBounce, the sad but true fact is that it's the rare album that gets repeated spins. However, every now and then an album comes along that gets immediately placed in heavy rotation, and for the past couple weeks that album has been Raheem DeVaughn's A Place Called Love Land. I am so in love with Rah's new collection that I listen to it at least once a day (and sometimes more) and have committed most of the songs to memory. So I'm just waiting to hear these new songs in concert so that I can sing along like I have no damn sense whatsoever, and I won't have too long to wait to make that happen with Raheem's TheLoveLand Tour kicking off in early October. The self-proclaimed Love King will break audiences off starting October 2nd in Baltimore before wrapping up on October 19th in Houston. This tour will take him along the East Coast, into the South and with a few Midwest dates sprinkled in. If your city isn't listed amongst the tour dates, then don't despair because this is only the first leg of TheLoveLand Tour with more cities and dates to be added. If your city is listed, then be sure to buy your tickets now so that you don't miss out on this Love Land experience.
Center