Tamar Braxton Has A ‘Good Morning’ With ‘Love And War’ 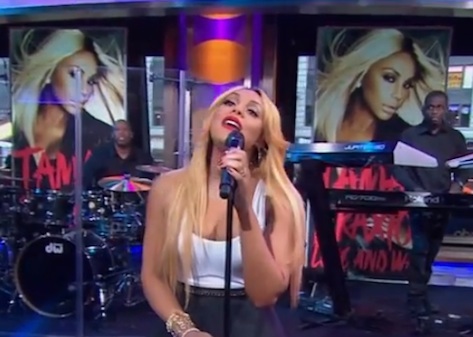 Tamar Braxton is poised to have the best week ever. At the stroke of midnight last night, her highly anticipated sophomore album and Epic Records debut, Love and War, was released much to the delight of Tamartians everywhere. And once her fans woke up this morning all they had to do was turn to ABC to see the boldest Braxton live on Good Morning America. After a brief interview with Robin Roberts, who asked about her "baby daddy" Vincent Herbert and their three-month old son Logan whom Mrs. Braxton-Herbert calls "the love of my life," Tamar launched into a medley of singles "Love and War," "The One" and "All the Way Home." This morning's performance was just a preview of what's to come when She hits the road with John Legend this fall. Tamar's winning week continues with the second season premiere of Tamar & Vince on WE tv on Thursday, September 5th. By week's end we should also have an idea of how Love and War is faring on the charts, but with this week's media blitz -- and a solid R&B album to boot -- I suspect the youngest Braxton sister has nothing to worry and everything to smile about.