Tamar Braxton Shows Who SHE Really Is On ‘Love And War’ 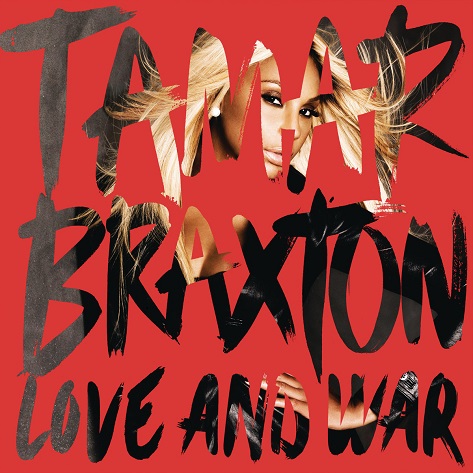 Most people with Tamar Braxton's musical career past would've thrown in the towel by now. Releasing her self-titled debut album 13 years ago, the diva spent the majority of her recording career in record label limbo, eventually settling on singing backup for her more famous sister, Toni Braxton. Then came reality show phenomenons Braxton Family Values and Tamar & Vince and the prospect of the youngest Braxton actually having a second shot at becoming a star became a reality itself. Still, it was all just fun and games until Tamar fired a warning shot with lead single "Love and War" and the R&B world took notice. Led by sultry vocals and showing much more emotional depth than she'd displayed in her reality endeavors, "Love and War" was exactly the first single she needed to relaunch her career. But does the rest of her sophomore album, also titled Love and War, deliver on the expectations that the singles have created?
Center

She kicks off the party with single "The One," which somehow manages to sound fresh even with the overused "Juicy Fruit" sample. "Tip Toe," however, doesn't achieve the same feat. In fact, it exemplifies the problem with a most of the album's uptempo numbers. Instead of showing that Tamar can hang with the youngsters, it feels like she's a grown woman trying on her daughter's clothes. It's a shame too, because she more than proves herself on the mid-tempos and ballads offered here. Of course, there's the aforementioned "Love and War," but the album's first half also offers "Stay and Fight," one of the best ballads I've heard this year, and third single "All The Way Home," both of which really show off what Tamar's voice can do.

For some reason, the songstress decided to follow those strong showings with two super short, repetitive tracks, "One on One Fun" and "She Did That." They don't really do much other than set the stage for "Hot Sugar," which isn't really needed as "Hot Sugar" is perhaps the only uptempo here that actually works (even though it comes off a bit as Rihanna-lite). Wisely, the remainder of the album operates within Tamar's strong suit: ballads. "Where It Hurts," "Prettiest Girl," "Sound of Love" and "White Candle" could all find homes on urban contemporary radio playlists. It's "Pieces," however, that is perhaps the strongest cut of the album's latter half, with Tamar singing the hell out of the Brian Michael Cox-penned track about wanting all of her man and not just parts of him. She closes the album with the Mariah Carey-esque "Thank You Lord." Seeing as she credits Carey as her greatest vocal influence and her singing career started with the church, it's a more than fitting end to an album more than a decade in the making.

Though it at times seems like she's trying to play catch up with artists who sprung up in her wake, Love and War is an overall solid effort that showcases just how talented Tamar Braxton truly is, especially when she's singing he kind of material worthy of her rich, honeyed voice. Based off what's presented here, it's clear that her days of singing "doo wop pop pop" are long over.