You’ll ‘Freak Out’ Over This Deep Cotton Trailer 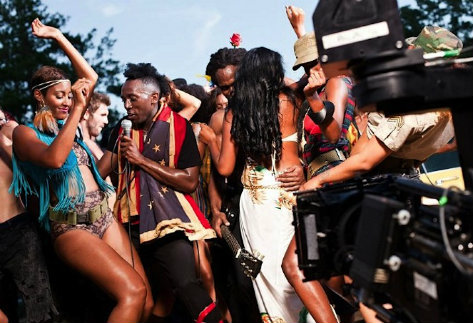 When Janelle Monáe's SONOS commercial first aired, I admittedly paid little attention to the wireless speaker system she was hawking. That's because my attention was instead drawn to the rollicking house party she and her Wondaland Arts Society crew were having. Long after the ad spot had ended, I'd found myself humming the melody that caused Janelle and crew to break out and dance. While I had only heard a few seconds then, its fun and catchy beat was enough to make me wonder when the song would get a proper release and become more than just the background music for a speaker spot. So imagine my excitement when I learned that the song in question, Deep Cotton's "We're Far Enough From Heaven Now We Can Freak Out," was finally getting released, along with an eye-popping video. Next, issue me a late pass for just realizing that the full song was actually released for free via the duo's website LAST YEAR around the same time the commercial was unveiled. Though I'm annoyed that I somehow managed to miss the initial release, there's no sense in crying over spilt milk now, especially when there's this fun teaser to reignite my excitement.

Directed by Alan Ferguson (aka Solange's longtime boo), the video's theatrical premise is of an apocalyptic world where a group of women warriors are out to bring down Deep Cotton front men Nate "Rocket" Wonder and Chuck Lightning because of the hypnotic effect their music has on women. Naturally, music will prevail in the clip featuring guest appearances from fellow Wondaland cohort Roman GianArthur and actress Megalyn Echikunwoke.While I'm not sure when the video will premiere in its entirety, the song will be featured on Deep Cotton's upcoming Runaway Radio fixtape, available for download September 25th on their website. In the meantime, get into this action-packed clip and pick which side you want to win in the battle between good and evil.