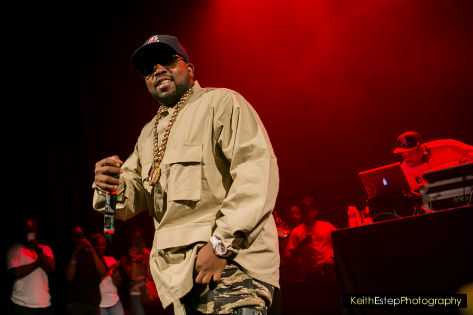 Making it just in time to catch the main act, I entered the Howard Theatre and was greeted by a large red velvet throne sitting on the stage. Who did it belong to? None other than ATLien Antwan Andre Patton aka Big Boi. The show, a part of his delayed Shoes for Running Tour, had also featured rapper Killer Mike, indie electro soul band Fishhawk and rapper Renegade as opening acts. The Howard Theatre wasn't packed, with the top floor closed but genuine Big Boi and OutKast fans were front and center ready to hear their favorite hits. Once Big Boi hit the stage, he was ready to party. Decked out in a baggy khaki shirt with big gold chain and camouflaged pants, he was flanked by a band, background vocalist Keisha Jackson and two hype men who danced in sync throughout the show.
Center

The entire performance was an arbitrary mix of tracks from Big Boi's solo efforts and timeless hits from OutKast, who just celebrated their 15th anniversary. Big Boi started off with "ATLiens" and went into a fast-paced "Rosa Parks" that got the crowd amped. A few days into being furloughed, the DC crowd let loose when Big Boi proclaimed, "The government might be shut down but we turned the f**k up!" Immediately the funky synths kicked in and the crowd went crazy to "Shutterbug." Despite his left leg still in an elaborate contraption I can only call a cast, Big Boi didn't hesitate to use the whole stage during an energetic performance that had him taking a few breaks in that cushy throne of his. "Y'all gotta bear with me, I gotta fix my pirate leg," Big Boi said. Once he got himself together, the banger "General Patton" came on and created a wave of jumping fans. 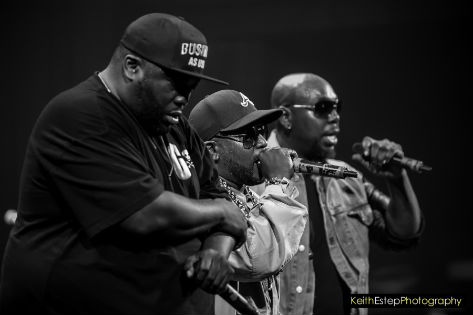 I felt a little empty inside knowing Andre 3000 wasn't there to hop in when it came time for his verses during "B.O.B" and "Ms. Jackson," but Sleepy Brown was on hand to keep us focused. During the "Aquemini," "Stankonia" and "ATLiens" medley, they also performed "Ghetto Musick" and "So Fresh, So Clean." Killer Mike joined in during "The Whole World" and stayed to rock the stage during "Thom Pettie" that had the whole crowd doing the dance and yelling "Thom Pettie that hoe." Big Boi's tireless dancers invited some ladies from the audience to get down with them during "The Way You Move." The two-step was alive and well.

The show wouldn't be complete without the "International Players Anthem" and just in case you forgot where most of the performers on stage were from, Big Boi performed "In The A" and had people from the DMV representing Atlanta to the fullest. Big Boi ended the show with "Tremendous Damage" after the crowd brought him back for an encore and concertgoers left winded, tipsy and satisfied. [Photos: Keith Estep]