Will This ‘Black Nativity’ Trailer Put You In The Holiday Spirit? 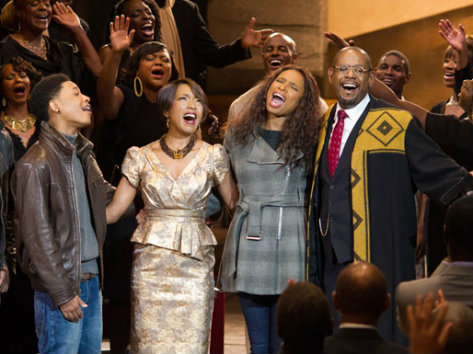 The holiday marketing blitz seems to start earlier and earlier with each passing year. Even though we still have several weeks until Halloween, marketers are already trying to get folks in the holiday spirit. Mary J. Blige is set to release her first holiday album in October, The Best Man Holiday trailers have excited and intrigued and now we get another look of what's sure to be another popular holiday-themed flick to premiere in 2013. Jennifer Hudson, Forest Whitaker, Angela Bassett and Jacob Latimore lead the cast of the Black Nativity, the film version of the Langston Hughes classic play, Tyrese, Nas and Ms. Holiday Spirit herself, Blige, round out the cast of supporting characters. The film centers on Hudson's character, a money-strapped single mother in Baltimore, who sends her teenaged son (played by Latimore) to spend the holidays with his estranged grandparents (Bassett and Whitaker) in New York City. While a trailer for the Kasi Lemons-directed movie first premiered back in July and gave moviegoers the first preview of Hudson and Latimore's "Silent Night" duet, this clip also provides a snippet of a gospel-infused version of the Stevie Wonder classic "As." While there's no word yet on a release date for the movie's soundtrack, with Raphael Saadiq serving as the score's producer and such musical star power in starring roles, the film's producers would be crazy to not capitalize on this by releasing a soundtrack. Black Nativity will open in theaters on November 27th.