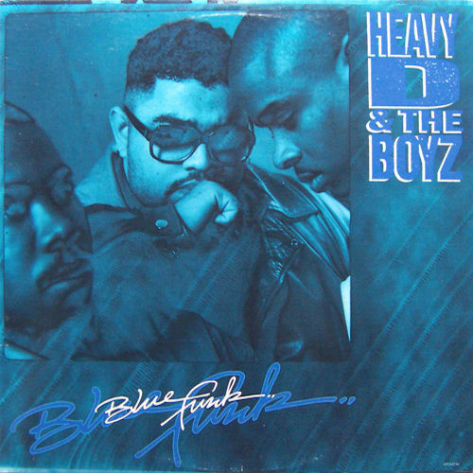 Growing up as the only child of two music lovers, my household was filled with music. My parents made sure I was served a healthy dose of both R&B music and contemporary jazz. So when the rap genre first began gaining popularity, much like my parents, I avoided it. It was too loud, too harsh, too unrelatable for this teenaged girl who was more inclined to bump Luther Vandross and Michael Franks than Rakim or Big Daddy Kane. However, there was always one rap group in particular that I always seemed to gravitate towards, Heavy D & The Boyz. In fact, their 1989 album, Big Tyme was the first rap album cassette tape I ever begged my mother to purchase, spurred on by the decidedly R&Bish sounding "Somebody for Me" and "Gyrlz, They Love Me." The smiling and affable overweight lover even managed to win over my mom, who up until that point had been staunchly opposed to what she had deemed to be "ghetto music."
Center

From that point on, I considered myself a fan. My first concert experience came via a Heavy D concert. Along with the rest of the group's fans, I mourned the tragic death of dancer Troy "Trouble T. Roy" Dixon and then rushed to buy the subsequent album Peaceful Journey. So as he geared up to release his fourth studio album, I knew I had to have it. When my copy first arrived in the mail (shout out to Columbia House!), I could barely wait to feast my ears on what I assumed would be the typical Heavy D fare.

However, it only took a few seconds to realize that this album would be different. After establishing himself as one of rap music's most accessible and easily digestible artists, Heavy D took things in a totally different direction with 1993's Blue Funk. Whereas the previous albums had been more straight-laced, on this new album, the Heavster suddenly seemed to have a chip on his shoulder. The ladies' man image that he had so carefully constructed had given way to a Heavy D with something to prove. The New Jack Swing-influenced sound that had pervaded past works was gone, instead replaced with the grittier sounds of DJ Premier, Tony Dofat and Pete Rock.

The biggest change was in the sound. Filled to the brim with hard hitting snares and the deep bass that defined East Coast hip hop at the time, the songs contained a sense of urgency and directness. The album's producers dug deep into the crates, sampling everybody ranging from James Brown to Hamilton Buchannan to King Floyd. Lyrically, his flow and delivery had also toughened up. It almost seemed like he had something to prove. This Heavy D talked of earning his "ghetto props," repeatedly emphasizing it with a punched-up intensity. Nowhere is the new, streetwise Heavy more evident than the Dofat-produced "Who's the Man?" With a beat that could have easily been a Das EFX track, Heav lays it on the line with an intensity that caught many fans off guard. One could even take a wild guess that the sound slowed his momentum ever so slightly. Whereas his previous two releases had both been certified platinum, Blue Funk only went gold. It reached the #7 spot on Billboard's R&B Chart before floundering out with only two official singles, including "Truthful" and "Who's the Man?"

Despite the many differences, there were some similarities to his older work. Sprinkled in with his tough guy talk were the usual reminders of his irresistible, Lothario-like ways. And always proud of his Jamaican heritage, he delved into it again on the album, enlisting the help of dancehall production duo Steely & Clevie on "Girl." Meanwhile, a sample of Chaka Demus & Pliers' "Bam Bam" showed up in "Talk is Cheap."

The interesting thing with this album though is that as out-of-character as it seemed at the time, 20 years later, the album captures the sound of the times. The posse cut, "A Bunch of N***as" goes just as hard, with Busta Rhymes, Gang Starr, 3rd Eye, Rob-O and a young Notorious B.I.G. each taking their turn on the mic. Blue Funk as a whole serves as a reminder of all the facets of the multi-talented artist. His next album, 1994's Nothin' But Love, went platinum and catapulted to the top of the charts. He also went on to have a successful acting career, earning him roles on both television and the big screen.

Two years after his untimely death, the void is still felt. For me, Heavy D was my gateway to hip hop, showing me that there was more to the genre than what I had erroneously assumed. Although this album wasn't considered a commercial success, its now considered by many to be one of his best albums. Proving that stepping out on a limb and breaking the mold was possible, Blue Funk exposed the complexities that made Heavy D & the Boyz legends before their time.