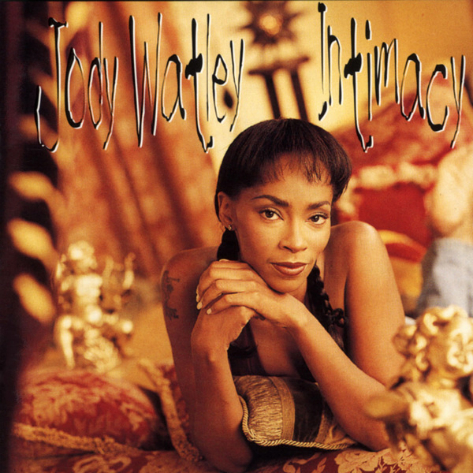 Jody Watley's 1993 release Intimacy saw the singer pushing the creative boundaries of her music. When artists take albums, as a concept, seriously, we can see their personal and professional growth. When artists do not take albums seriously, it comes off as more of a journey through the trends and producers of the moment. Intimacy saw Watley continue to trade the sharp grooves that allowed her to set dance floors afire in the '80s for soulful, jazzy tones that sound more fit for a quiet evening with a loved one. A comparison of the album's cover with her previous cover for Affairs of the Heart further cements this idea. Some may see this album as Watley further conceding her hit-maker status, but fans will continue to come back to this album as a vision of a confident artist exploring her maturity in a changing musical industry.
Center

The album's first track "Workin' On A Groove," while a solid affair, seemed like it took inspiration from Janet Jackson's janet., which was released earlier in the year. The second track "When A Man Loves A Woman" took a different approach. The track combined spoken word with some nice trip-hop'ish production. The placement of the track earlier in the album nicely set up the sensual and responsible themes of the album.
"Are You The One?" was a simple ditty written by Watley and her frequent writing partner Andre Cymone. The big surprise on the album was Jody's cover of Stevie Wonder's "Too Shy To Say" from his masterpiece Fulfillingness' First Finale. On her version her emotion was raw, and it was easy to tell that the song had special meaning in her life.

The album's most prominent single "Your Love Keeps Working On Me" turned out to be very successful on the club charts and as an entry on the soundtrack to Bebe's Kids. The song was very different than the New Jack Swing and hip hop that dominated the airwaves in 1993 so it's easy to see how the song may have gotten lost in the shuffle. "Ecstasy" saw Watley back in her wheelhouse teaming up with dance music producer David Morales. "Ecstasy" took Watley back to the dance floor and pleased long-time fans who wanted to work up a sweat.

Intimacy may not have been the commercial success that her self-titled debut or Larger Than Life were, but this album does mark big strides in the career of Jody Watley. Intimacy showed her continuing to define her own sound and career in the midst of so much competition in the music world. The album may seem disappointing if you are looking at it through the lens of 1993, but when looking at it from the scope of Jody's career, it can be seen as a triumph.

Jody Watley's career is still going strong in 2013 with the beloved singer taking us for yet another twirl on the dance floor and enjoying a hit with the song "Nightlife." This iconic diva may have slowed down on the album front, but she continues to keep us enthralled one song at a time.


TAGS:  andre cymone, Class of 1993, david morales, jody watley, stevie wonder
Previous: Have A Slice Of Jesse Fischer & Sly5thAve’s ‘Watermelon Man’ Next: Morning Soul: It’s Only Logic For My Love To Be Glistening