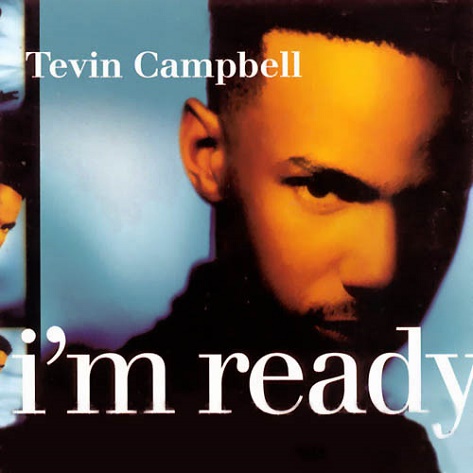 Twenty years ago, a teenaged Tevin Campbell was just coming off the success of his debut album T.E.V.I.N. and readying the release of his next, I'm Ready. Older and wiser than the 14-year-old who'd sang his way into the hearts of pop and R&B fans across the world, Tevin's next album would definitely show the world just how much he'd grown in the less than two years between the two albums' releases. While I'm Ready was full of the balladry that had won him favor with preteen girls everywhere, Tevin also explored a bit of his wild side on the disc with a little help from songwriter of the moment Kenneth "Babyface" Edmonds and Prince, who he'd worked with previously on Graffiti Bridge and Tevin's single "Round and Round." With Tevin addressing more...ahem...adult topics and dealings, the collection was not only named I'm Ready, but was a declaration that 16-year-old Tevin was, in fact, ready for the world.
Center
After the bounce

While I'm Ready saw Tevin still teaming with producers from T.E.V.I.N. for a few tracks, bringing in Babyface and Prince was a shrewd move, as working with the two took the singer in an interesting new direction. This is especially true of Babyface, who was responsible for three of the album's five singles (which also happened to be the set's highest charting singles as well). The chemistry between Babyface, his writing partner Daryl Simmons and Tevin was evident by the album's opening track and first single "Can We Talk." The single, which peaked at No. 1 on the R&B charts and No. 9 on Billboard's Hot 100, perfectly mixed Tevin's schoolboy charm with a maturity that transcended his age. It was a trend that continued with their other collaborations "Always In My Heart" and the albums lovey-dovey title track, "I'm Ready."

Where Babyface brought the sweet to I'm Ready, Prince (under the pseudonym Paisley Park) opted to bring the funk to the project. The Purple One's first contribution was "The Halls of Desire," the first hint of sexuality in Tevin's career (but surely not the last as you'll read later). On it, Tevin played tour guide as he leads his girl down the halls and behind their doors, chastely flirting at what each could lead to. The next two Prince-ly numbers focused on America's problems with race. "Uncle Sam" confronted the problem directly, speaking out against racial intolerance by addressing the fictional United States representative over a New Jack Swing groove. "Paris 1798430" found Tevin contemplating what many Black musicians contemplated in years past, avoiding American racism by fleeing to Paris to live a better life. Fast-paced and funky, each of Prince's contributions delivered a much needed break from all the ballads and mid-tempos that rule the roost on I'm Ready. Still, there was one other contribution from Prince that switched things up in a more interesting way.

While most of the ballads fell nicely in Tevin's wheelhouse, Prince to delivered the album's most shocking moment. Whereas "Can We Talk" and "Always In My Heart" were sugary sweet and age appropriate, "Shhh" was down right mannish. The purple slow groove was all about the bedroom as Tevin offered to "do you after school like some homework" before letting us know that "this love is a private affair." While relatively tame compared to the audacious and explicit lyrics were so used to hearing in this day and age, teen idol Tevin singing this unabashedly about sex while a woman cooed and moaned in the background caused more than a few young ears to perk up and parents' eyebrows to raise. Still, Tevin owned the song better than any 16-year-old deserved to (one could even argue that Tevin's is the definitive version, even though Prince made his own recording of the song for his 1995 The Gold Experience).

But Babyface and Prince didn't run the entire production show. Narada Michael Walden was also on board for the project, contributing four of the set's tracks. The experienced producer's most notable contribution here is single "Don't Say Goodbye Girl, " which boasts lyrics from songwriting legend Burt Bacharach. While not as high charting as Babyface's contributions, it was a solid mid-tempo number that delivered. Elsewhere, Walden allowed Tevin to further express his range on slow jam "What Do I Say" -- which features song writing credit for Johnny Gill -- and the set's final two soaring ballads, "Brown Eyed Girl" and "Infant Child."

Though he was only 16, I'm Ready was the coming of age for Tevin Campbell. Dealing with things personal, political and sexual showed that the then-teenager wasn't afraid to take on things that most people would consider beyond his grasp. It's double-platinum success earned him three GRAMMY nominations and also showed that Tevin's was a talent that couldn't be denied. Sadly, I'm Ready was also the pinnacle of Tevin's career. The two studio albums that followed, Back to the World and Tevin Campbell, charted lower and lower and, after the release of his greatest hits compilation, much wasn't heard from Tevin in the music realm. Still, the success of I'm Ready should be a guiding beacon for Tevin, who is rumored to be attempting a return to music with mega-producer Teddy Riley at the helm. I'm sure that whatever Tevin decides to do in his musical future, his adoring fans will be waiting for it and most definitely ready.


TAGS:  babyface, burt bacharach, Class of 1993, Daryl Simmons, narada michael walden, prince, teddy riley", tevin campbell
Previous: Tanya Morgan Searches For ‘The Way Out’ Next: Morning Soul: You Were Talking Kinda Cocky Like You Had It Going On